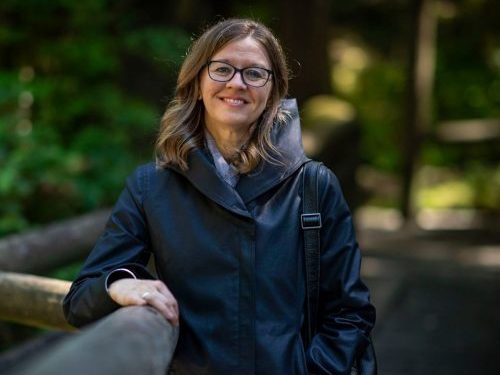 An international communicators’ conference opening in Banff today has dropped pro-fossil provocateur Vivian Krause as one of its keynote speakers.

“According to an older version of the schedule for the International Association of Business Communicators (IABC) Canada West Conference, Krause was slated to deliver a presentation Monday morning on how to ‘communicate effectively in high-stakes, emotionally charged situations’,” Star Edmonton reports. Association chair Jonathan Tremblay told the paper the conference committee “had been working with Krause for several months,” writes reporter Hamdi Issawi, “to learn more information about her proposed presentation, and how it would benefit the audience and connect to the theme of the conference—in this case, using data in communications strategy.”

“Clarifying that connection was one of our largest concerns with Ms. Krause’s presentation,” Tremblay wrote. “We’ve found it challenging to connect with Ms. Krause despite repeated efforts. With the date quickly approaching, we decided to offer the spot on our agenda to another presenter.”

Getting the data right seems to be a persistent problem for Krause, whose dogged attempts to claim foreign influence in Canadian anti-pipeline movements were debunked most effectively by an equally dogged oilpatch journalist. “Experts and environmental organizations reached by Star Calgary say Krause’s conclusions not only ignore the international nature of environmental philanthropy, but leave out the fact that Canadian environmental organizations receive most of their money from Canadians,” Star Edmonton writes.

Calgary communications professional and longtime IABC member Jody MacPherson said she’d considered leaving the organization when she saw Krause on the conference program. “The first thing that stood out to me was the political nature of it, and my association is supposed to be strictly neutral on politics,” she said. “As a member of the association, I really felt that it wasn’t appropriate to have a political speaker.”