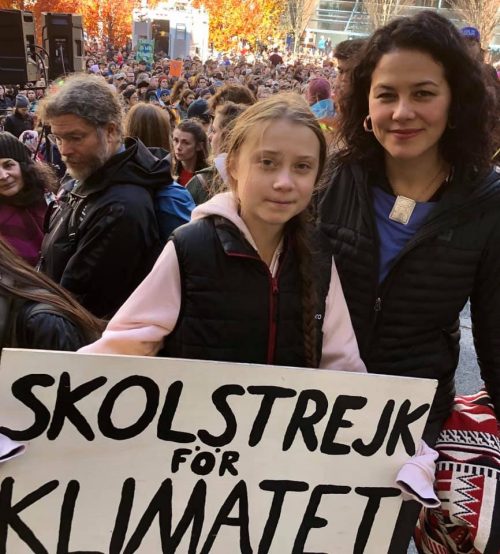 An estimated 15,000 supporters crowded through downtown Vancouver for the city’s first weekly climate strike since the federal election, with #FridaysforFuture founder Greta Thunberg on hand to lend her support to a youth lawsuit against federal climate inaction that was launched the same day.

“With this being our first strike post-election, we need numbers to show our government that we are unstoppable and a better world is possible!” Sustainabiliteens Vancouver wrote on Facebook. And the community delivered, with a five-hour march and rally that snaked three kilometres through downtown to and from the Vancouver Art Gallery plaza and heard speeches from dozens of local activists and Indigenous land defenders.

On National Observer yesterday, Chris Hatch raised some tough, important questions about whether that many dozen speakers really needed the air time. And yet for the most part, “despite the cold, the marchers have kept the energy up throughout the route,” tweeted Star Vancouver reporter Cherise Seucharan at 4:41 PM local time. “Just passed a group of adults looking on, some looking curious and some fully grinning.”

“Climate leaders do not build or invest in pipelines that not only stand to have devastating environmental repercussions but undermine Indigenous title and rights. Trudeau has taken a contrary path,” said Kukpi7 Judy Wilson, secretary-treasurer of the Union of British Columbia Indian Chiefs.

“They are selling our future for their comfort and profit,” Thunberg said. “They have the nerve to look us in the eyes and tell us they are they doing enough. Whatever they are doing, they are doing it wrong.”

“The pressure has to keep building,” added environmental icon David Suzuki. “We need to see action in Ottawa. If the government continues to support a pipeline, they’re not hearing the message.”

Organizer Allie Ho told Star Vancouver that Sustainabiliteens had assigned a volunteer security team to accompany Thunberg on the march, anticipating the enthusiasm and celebrity status she would attract along the route. “She’s our inspiration but she’s not our idol,” Ho stressed. “She doesn’t want it to be that way. She wants to be treated like a normal school striker.”

Over the weekend, Observer publisher Linda Solomon-Wood reported that provocateurs from Rebel Media had disturbed Thunberg’s privacy during her stop in Edmonton earlier this month, prompting Vancouver organizers to limit media access to the 10- to 19-year-olds involved in the new lawsuit.

In Winnipeg, meanwhile, about 50 climate strikers at the Manitoba legislature wore party hats for a mock celebration of the Trudeau government’s re-election, CBC reports.

“Congrats, Trudeau,” read one sign. “Now do your job.”

“No more emissions, screw the politicians,” said another.

“So far, we haven’t seen much of a change,” said Grade 11 student Jaden Burkowski. “It’s not only our planet, but it’s his, too. He needs to get his ass into gear and do something.”

The Vancouver rally highlighted the 15 youth behind the new climate court challenge, which asserts that the federal government’s inadequate response to the climate crisis violates the plaintiffs’ rights under Sections 7 and 15 of the Canadian Charter of Rights and Freedoms. “The endgame is a climate recovery plan based on the best available science. We don’t care about compensation, or damages,” said legal co-counsel Chris Tollefson. “It’s about doing the right thing.”

Star Vancouver says one aspect of the case is the asthma, allergies, fatigue, anxiety, depression, and Lyme disease some of the teens have faced—all health conditions that the lawsuit lists as climate-related injuries.

Cowichan Valley teen climate activist Sierra Robinson, 17, who has Lyme disease, recalled swimming and playing with friends in a local river that has since dried out because of a changing climate. “Little seven-year-old me was playing in the river catching frogs, and now I’m 17 and going to the river…and there is no river,” she told The Star Vancouver. “It’s really upsetting and really scary. What will happen in the next 10 years?”

“I’ve grown up every day knowing my future is not a given,” said Toronto climate strike organizer Cecilia La Rose, 15, who’s had asthma since age 6, had to quit her soccer team because of extreme temperatures and difficulties breathing, and saw her home flooded in a heavy rainfall. “What I want out of life, it may not happen because the environment may not be stable enough for me to do that.”

“It’s frustrating to me to see how little the government has done after massive protests,” she added. “I don’t think it’s as real for them as it is for us.”

“The storms in the last month, with Hurricane Dorian, I’ve never seen anything like that,” said Ira Reinhart-Smith, 15, of Caledonia, Nova Scotia. “Storms are becoming more powerful and more frequent. Youth across Nova Scotia are going to experience extreme problems due to climate change and the ocean rising.”

Albert Lalonde, 17, of Montreal, said climate action has to go beyond changes in individual lifestyles and consumption habits. “Having an eco-responsible way of life is a privilege,” he said. “This is about uniting and asking the government to use their power to make society as a whole more ecological.Madeline Laurendeau, 17, said air quality affects her severe asthma, and the climate crisis affects her mental health, CBC reports. “I have pretty severe anxiety, and also some issues with depression. An ongoing climate crisis and the threat of extinction really magnifies that to me,” she said. “It’s like there’s nothing I can do about it, which is kind of what anxiety loves to feed off of. I’m involved with the local strike group, and really that activism is what helps me, because I feel like I’m doing something positive.”