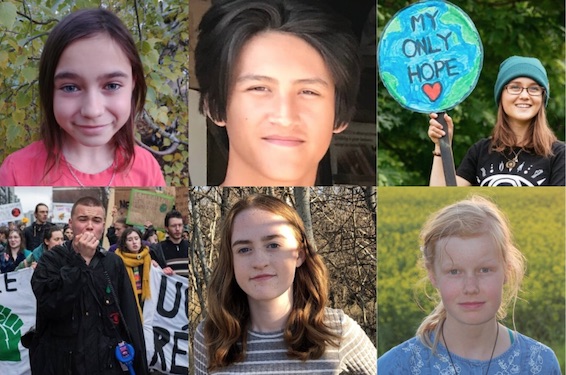 Six of the 15/Our Children's Trust

Fifteen Canadian youth are filing a lawsuit against the federal government today, accusing Ottawa of violating their rights under the Charter of Rights and Freedoms by contributing to the greenhouse gas emissions responsible for the climate crisis.

The case is based on the young plaintiffs’ right to life, liberty, and security of person under Section 7 of the Charter, as well as their equality rights under Section 15, on the basis that they’ll be more severely affected by the climate crisis than any other age group, Star Vancouver reports.

The youth will be filing their suit with support from the David Suzuki Foundation and Oregon-based Our Children’s Trust. “The lawsuit calls on Canada to cease its activities that violate the youth plaintiffs’ rights and to prepare and implement a Climate Recovery Plan that reduces Canada’s GHG emissions in a manner consistent with the best available science,” Our Children’s Trust writes. “P.S. A renowned youth climate activist from Sweden will be there too…”

The youth are represented by two law firms, Arvay Finlay LLP and Tollefson Law Corporation, with support from the Pacific Centre for Environmental Law and Litigation.

Our Children’s Trust senior attorney Andrea Rodgers said climate litigation dates back 40 years, but most cases against individual companies and projects have been unsuccessful, since “it was difficult to prove direct causation coming from emissions from a particular project,” Star Vancouver explains. Gradually, environmental lawyers learned that “it’s not these individual permits that are the problem—the problem is the overall system, and the pattern of government issuing these permits over decades,” Rodgers said.

The change in strategy paralleled a shift in public awareness of the climate emergency as a fundamental human rights issue.

“I think climate change started out as environmental issue, but it is a societal problem and there are environmental effects that are happening,” she told Star Vancouver. “We are starting to see climate change as a human rights problem as opposed to an environmental one.”Other legal experts said they’d expected a constitutional challenge in Canada, after a similar case succeeded in The Netherlands and an unsuccessful suit last year by Montreal-based ENvironnement JEUnesse established a basis for litigation in Canada. “We’ve seen this coming for a while,” said Osler, Hoskin & Harcourt LLP litigation partner Maureen Killoran. While ENJEU’s attempt at a class action based on Sections 7 and 15 failed, the Quebec court “recognized the issue that was raised, and they said it was in the scope of executive branch.”