Warming Could Drive Up Risk of Ebola Epidemics in Africa 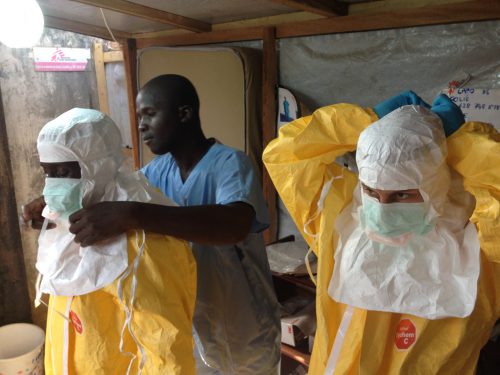 The risk of Ebola epidemics in Africa—especially in less-developed countries with high birth rates—will increase significantly if the world does not act aggressively to rein in global warming, according to a new paper in the journal Nature Communications.

“With warming temperatures, bats and other animals that are thought to transmit the virus to humans are expected to move into new areas, bringing the disease with them,” writes Carbon Brief.

The new modelling study, which combined a range of emissions and socio-economic scenarios together with granular details of “host distribution, human population size, people’s movements by roads and air, and land use,” also suggests a sharp increase in the frequency of Ebola epidemics. Whereas the disease currently breaks out every 17 years on average, “by 2070 epidemics could break out, on average, once every 10 years, if rapid population growth and slow development are accompanied by inaction on climate change,” Carbon Brief states.

“While there is still some uncertainty about precisely which animals pass Ebola on to humans, the prime suspects are large fruit bats that are often hunted for bushmeat,” Carbon Brief explains. “These creatures are known to prefer warm and wet habitats, which are expected to expand in the target regions as the climate changes.”

Noting that their modelling suggests “a general, ongoing increasing in Ebola incidence over time,” the UCL team found that “the greatest increase occurs in a scenario with high emissions, high population growth, and slow economic development (RCP6.0 and SSP3), with epidemics expected to occur nearly once every 10 years.”

On the other end of the spectrum, “under the most optimistic of the scenarios they used—which assumes moderate emissions and high development (RCP4.5 and SSP1)—the occurrence drops to roughly once every 30 years,” Carbon Brief notes.

While the researchers write that “global commitments to tackle climate change may drive down Ebola cases,” they’re pessimistic about the odds of hitting that mark. “Efforts to decrease poverty in Central and Western Africa with a concomitant increase in health care resources, therefore, would appear to be the most realistic approach to reducing future Ebola virus disease risk globally.”