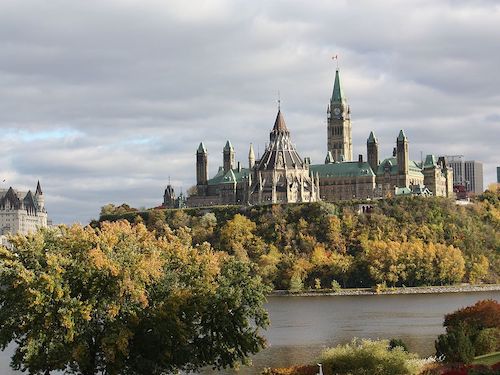 The Canadian climate community is taking a victory lap and getting ready for the hard work ahead, after this week’s federal election largely delivered on the hope that the climate crisis would emerge as a key issue setting the composition of the country’s new government.

With five parties winning seats in the House of Commons, at least 63% of Canadians cast their ballots for parties with relatively strong campaign platforms calling for faster action on climate, making it clear “that the majority of Canadians asked for more ambitious and urgent climate action,” said Climate Action Network-Canada Executive Director Catherine Abreu. “People voted out of fear of the Conservatives today, rejecting their threats to roll back climate policy. At the same time, voters did not have enough confidence in the Liberal climate record to hand them another majority.”

Smart Prosperity puts the popular vote in favour of ambitious climate action and environmental protection at 64.3%. The institute lays out a post-election agenda that begins with investment and tax incentives for clean innovation, market-based responses to climate and other environmental problems, incentives for nature conservation, controls on plastics pollution, and financing for green infrastructure.

“Public polling told us that climate change was a top priority for Canadians leading into Monday’s federal election,” write Executive Chair Stewart Elgie and Executive Director Mike Wilson. “We see this result as a renewed opportunity to advance policies that are designed not only to protect our environment but also to build a stronger, cleaner economy.”

With none of the five parties holding the minimum 170 seats required to form a majority in Parliament, the Liberals will only be able to retain power and advance specific pieces of legislation with at least the tacit support of the New Democratic Party or Bloc Québécois caucuses. That’s after an election campaign that saw both the NDP and the Green Party introduce climate platforms that were more ambitious than Trudeau’s—forcing the Liberals to catch up with new pronouncements or their own.

“That’s going to push [the Liberals] to go even further than they would on their own accord,” said Clean Energy Canada Policy Director Dan Woynillowicz. “What’s clear coming out of this election is that being able to successfully secure the support of Canadians…is contingent on having a serious climate change plan.”

The other push comes from a post-election poll by Abacus Data that underscores the political polarization that has consumed much of the news commentary this week, but also singles out climate change as the issue that may have elected the country’s next government. Among Canadians who voted for the Liberals or New Democrats, a runaway plurality of 34% cited climate change and environment as their vote-determining issue, with health care access a distant second at 21% and poverty and equality placing third, at 19%. Among Conservative supporters, 19% said the carbon tax drove their votes, and 18% cited pipelines and oil—both falling behind government spending and deficits as Conservatives’ lead concern, at 30%.

That result “highlights the political divide on so many big issues facing the country—with climate change and the energy sector front and centre,” writes Abacus CEO David Coletto. “There is a clear parliamentary majority for bold action on climate change. But finding a way to bridge the divide on the issue will be the greatest challenge the new government will face.”

With the NDP and Green platforms, a week of climate protests in September, and #FridaysforFuture founder Greta Thunberg’s visits to Montreal and Edmonton creating a “perfect storm” that amplified the climate crisis as a campaign issue, Abreu said the Liberals had no choice but to respond.

“That’s the story of the Canadian election, and I think the reason that’s happened is that voters have been so determined to keep it on the agenda,” she told the Toronto Star. “It is the one policy issue that has penetrated the noise.”

Much of the post-election news coverage points to the federal carbon tax as the big winner in the campaign., with CBC calling the policy “the only landslide victor” of the night. Andrew Scheer’s Conservatives had set out to make Trudeau’s backstop price on carbon a central issue propelling his party to power. But that voter concern never materialized, even after Scheer pledged to repeal the backstop price as his first act of government.

“Carbon taxes have been under siege in recent years in parts of the country, particularly with the election of premiers Doug Ford and Jason Kenney, who both campaigned hard on fighting the policy,” CBC reports. “To this day, the only way Alberta’s Kenney describes carbon pricing is as the ‘job-killing’ carbon tax.” But “despite the sharp rhetoric and some signs of electoral momentum against a carbon tax, Monday’s federal election results suggest a different mood among many Canadians.”

“I think one of the reasons the Liberals didn’t win bigger is because they didn’t emphasize their support for the environment in the last five days of the campaign, when a lot of people were making up their minds,” said Calgary-based political consultant Stephen Carter. “That gave permission for a lot of Canadians to move to the Greens and the New Democrats.”

“Andrew Scheer ran without a climate plan,” agreed Mount Royal University political scientist Duane Bratt, and the Conservatives had “better wrap their heads around that. This issue is not disappearing, so if they want to regain power, whether that’s in two years, three years, four years, six months, they’d better come up with a real climate plan.”

In the aftermath, Saskatchewan Premier Scott Moe stubbornly maintained he would ask Trudeau to cancel the carbon tax right away. “Last night, Prime Minister Trudeau stated to Saskatchewan and Alberta: ‘I’ve heard your frustration. I want to be there to support you’,” Moe said in a statement Tuesday. “Those are nice words, but we need action.” Ford announced he would pursue his unlikely Supreme Court challenge against the carbon tax, Globe and Mail columnist Gary Mason accused Kenney of waging a “highly inflammatory” campaign that raised the spectre of western separatism, and Toronto Star columnist Linda McQuaig noted that Kenney’s fulminations against the “green left” pit him against most Canadians.

But New Brunswick Premier Blaine Higgs was prepared to read the message in Monday’s vote, signalling Tuesday that he would look at how his province can align with the federal plan. “I will,” he told CBC. “I can’t ignore the obvious here. The country has spoken.”

The Canadian Press casts the vote as a call for politicians to get down to work on climate action and cut the partisan bickering. And the news agency says Trudeau may have picked up the signal loud and clear. “You have asked us to show even more vision and ambition as we tackle the greatest challenge of this era, climate change,” he said in French during his victory speech Monday night. “That is exactly what we will do.”

But not loudly or clearly enough, apparently, to consider rethinking the pet project that may have cost him crucial support in British Columbia and Quebec—and may ultimately have cost him his parliamentary majority. On Wednesday, in his first news conference after the vote, the returning PM said he wants the controversial Trans Mountain pipeline expansion completed as “soon as possible”, positioning it right alongside a personal income tax cut as a top order of business for his new government. “Canadians sent a clear message that they expect their leaders to work together on the big issues that matter to them; two of them being the fight against climate change, and affordability,” Trudeau said. Finance Minister Bill Morneau later added the government still expects TMX to generate C$500 million in annual revenue for clean energy projects, apparently ignoring analysis released during the campaign that revealed the project as a potential financial loser.

“We purchased it for a reason,” Morneau said. “We now see how it can help us accelerate our clean energy transition by putting any revenues that we get from it into a transition to clean energy. We think that is the best way we can move forward in our current context.”

Morneau specifically said Trans Mountain would not be a part of negotiations with the other parties in the minority Parliament, though NDP leader Jagmeet Singh is so far refusing to take it off the table. Bloc Québécois leader Yves-François Blanchet said his newly-expanded caucus would stand against any pipelines that run through Québec, but was somewhat agnostic about Trans Mountain. “Apart from the fact that I don’t like our money being invested in oil, because it is the energy of the past and it is destroying the planet, I will let Western Canada do their own thing,” he said Tuesday.

Meanwhile, the campaign result delivered a dose of optimism in the United States, with several publications picking up on the strong voter support for effective climate action. “Whether Americans will actually prioritize climate change on Election Day next year remains an open question. A lot of people are pessimistic that it will happen, knowing our disappointing history,” writes veteran climate reporter Emily Atkin, publisher of the new Heated newsletter. “But I am less pessimistic than I was yesterday, because I learned about what happened in Canada this week.”

The Washington Post editorial board headlined the vote as a “victory for the planet”, commenting that the “narrative of political suicide” around carbon pricing and climate action “now has a Canada-sized hole in it”. E&E News said Trudeau’s re-election “could lead to stronger climate policies”, and the American Council for an Energy-Efficient Economy said the environment “could be the big winner” in the election. “With the Liberal Party’s new mandate, the Canadian government will now hopefully take the necessary action and demonstrate that energy efficiency, economic sustainability, and environmental stewardship are all possible at the same time,” writes Reuven Sussman, senior research manager in ACEEE’s behaviour and human dimensions program.