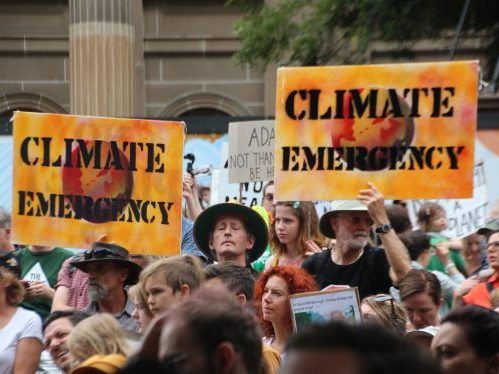 In the two days after Australia’s climate-denying Liberal coalition government blocked a motion to declare a climate emergency in the country, 370,000 citizens signed a record-breaking e-petition urging their government to ring the fire alarm on climate.

The petition asked the parliament to “immediately act and declare a climate emergency in Australia” and to “introduce legislation that will with immediacy and haste reduce the causes of anthropogenic climate change,” the Sydney Morning Herald reports.

The petitioners cited the universal scientific consensus on the urgent reality of anthropogenic climate change, and their own knowledge that “we must act now to minimize both human and environmental destruction”.

The Herald notes that “as an official parliamentary e-petition, the signatures theoretically carry more weight than other online petitions by organizations such as Change.org that do not require signatories to confirm they are residents or citizens of Australia.”

Asked how Energy and Emissions Reduction Minister Angus Taylor might react to the e-petition, a spokesperson forwarded the speech Taylor had given in Parliament the day before, in which he had derided the climate emergency motion, put forward by the Green Party and supported by Labor, as an “absolutely empty gesture.” Taylor singled out Labor for “making a huge song and dance about declaring a climate emergency” while “refus[ing] to commit to a single policy in this area from the last election.”

Labor climate and energy spokesperson Mark Butler countered that it was “no surprise” the Coalition had blocked debate on the motion, “considering emissions have been rising ever since 2014 and given the government’s own data projects emissions continuing to rise all the way to 2030.”

He added that “parliaments in the UK, Canada, and several other nations have already passed resolutions recognizing climate change as an emergency, and it is time that our Parliament did the same.”