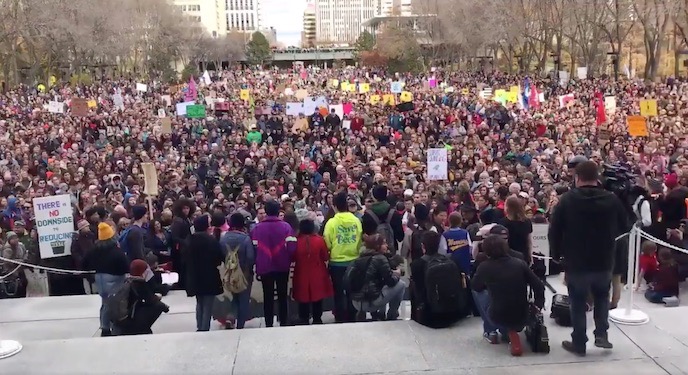 Thousands of Albertans swarmed the grounds of the provincial legislature in Edmonton Friday morning to attend a climate strike rally headlined by Greta Thunberg, the 16-year-old Swedish #FridaysforFuture founder who’s become a catalyst for millions of youth—and climate protesters of all ages—around the world.

The massive crowd more than fulfilled Star Calgary’s earlier prediction that “Greta Thunberg may just find an audience in the land of the oilsands”. Organizers placed the numbers at 10,000; police estimated 4,000.

“Today is Friday,” Thunberg said. “And as always, we are on climate strike. Young people all around the globe are today sacrificing their education to bring attention to the climate and ecological emergency.”

Thunberg added that she’d had a “wonderful reception” in Alberta, in a speech from the legislature steps that the Globe and Mail says included no reference to the tar sands/oil sands. “We cannot allow this crisis to continue to be a partisan, political question,” she said. “The climate and ecological crisis is far beyond party politics, and the main enemy right now should not be any political opponents, because our main enemy is physics.”

CBC says Thunberg gave a special shout-out to youth and Indigenous leaders at the rally, telling them that “you are the hope.” To critics of the #ClimateStrike movement, she added that “if you think we should be in school instead, then we suggest you take our place in the streets. Or better yet, join us so we can speed up the process.”

Leading into the rally, climate author and researcher Seth Klein told Star Calgary that public opinion in Alberta is more nuanced than the caricatures some Canadians carry around (and that some fossil advocates would have us believe). “Just as there’s a very vocal minority in Alberta that is opposed to meaningful climate action, there is also a sizable minority that is strongly supportive,” he said. “And there’s an awful lot of people in the middle who are just kind of confused about it all and aren’t sure, and in some ways, are looking for bold leadership.”

While celebrity activists like Leonardo DiCaprio, Neil Young, and Jane Fonda have raised local hackles when they’ve turned their attention to the Alberta tar sands/oil sands, MacEwen University assistant professor Brendan Boyd said Thunberg may be different—because she didn’t gain prominence in another subject area. “I wouldn’t characterize it as a dilettante, like these other people who are actors first or celebrities first, and then come to talk about climate change,” he said. “Her message about climate change has been what’s made her popular.”

Thunberg has received a mixed reaction from the province’s political elite: while Edmonton and Calgary mayors Don Iveson and Naheed Nenshi and NDP opposition leader Rachel Notley expressed interest in meeting her, the ruling United Conservative Party government made clear it would have no time to chat. On Friday, Premier Jason Kenney chose snark over substance.

“To those folks gathering at the legislature today, I want them to know that when they charged their iPhones last night, it was with power being generated out of this plant,” he said, during the opening of a new 120-kilometre natural gas pipeline meant to replace coal-fired generators. “When they power up the speakers at the legislature today, the power that lets them be heard came from power generated at power plants like this, that will be cutting their greenhouse gas emissions in half because of practical measures like this.”

[Kenney surely could not have intended to leave out the solar, wind-, and geothermal-generated electricity or energy efficiency services that are poised to become the real low-carbon job producers in his province, while fossils cut back thousands of positions in search of greater efficiencies.—Ed.]

“I definitely don’t think [United We Roll] are the enemy. I think they’re just expressing their opinion,” responded 15-year-old Fridays for Future YYC organizer Priya Migneault. “I just don’t want Greta to feel like she’s alone in her fight for climate action in Alberta.”