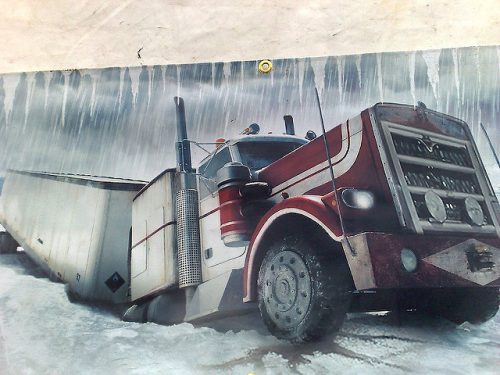 As the Arctic continues to warm three times faster than the rest of the planet, researchers are working hard to find ways to materially strengthen the melting snow and ice roads that for many Northern communities are the only practical way to receive heavy necessities like fuel and construction materials.

As “the only way in and out that doesn’t depend on a boat or plane” for dozens of far-flung communities across Canada’s North, winter roads have long been a lifeline, The Canadian Press reports, in a post republished by National Observer.

“It’s the only time of the year, those two or three months, when Northern communities can resupply their needs in fuel, construction material, and other bulk goods,” said National Research Council engineer Paul Barrette.

Resource development is also threatened by the weakening ice road system, CP notes, citing a recent study of the Tibbitt-Contwoyto winter road between Yellowknife and the Central Arctic diamond mines. By 2100, the study predicts, the Tibbitt-Contwoyto and other regional roads will be too soft to carry heavy loads, sinking any plans for a thriving natural resource industry in the North.

The NRC team’s current approach focuses on what Barrette identifies as a winter road’s frequent “weakest link”: the places where it crosses a body of water.

“Ice is tricky. It’s not as rigid as it seems and slowly deforms under a load,” he explained. Especially over water, and especially when temperatures are above normal.

In the hope of strengthening these “weak links,” Barrette and his team are experimenting with hardening the ice by mixing in wood pulp, a technique that “was used during the Second World War to create an experimental aircraft carrier,” CP states. Other possibilities include embedding steel cables or sheets of polypropylene mesh into the road—the guiding criteria are that any solution must be lightweight, cheap, and environmentally sound.

Conscious of the dangers faced by the people who travel these increasingly uncertain roads, Barrette intends to field test the most promising techniques by the fall of 2020. “There is a risk of breakthroughs,” he said, and “sometimes, the water’s deep.”