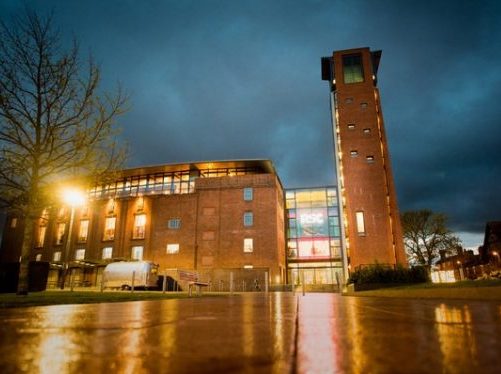 The iconic Royal Shakespeare Company in Stratford-upon-Avon has asked colossal fossil BP to exit stage right, after sponsoring the theatre since 2011.

The “embarrassing sacking” shows that, “for a cultural organization, taking money from an oil company today comes with costs that may end up exceeding the sums raised,” Bloomberg reports.

For nearly a decade, “BP has been subsidizing tickets at £5 apiece for 16- to 25-year-olds, broadening access to theatre beyond those who can afford the often painfully high prices,” the news agency writes. But the RSC had exactly that audience in mind when it announced its decision to “conclude” the sponsorship.

“Amidst the climate emergency, which we recognize, young people are now saying clearly to us that the BP sponsorship is putting a barrier between them and their wish to engage with the RSC,” the theatre said. “We cannot ignore that message.”

BP’s £2.6 million was a relatively small share of the RSC’s £86 million (US$106 million) in total revenue last year, Bloomberg says. “But its decision on BP was driven by commercial, as well as moral, reasons. Schools and young people are a big part of the RSC audience. The company’s Matilda the Musical production is a major contributor to its success. It cannot afford adults, influenced by children, choosing to spend their cash elsewhere. Young people are its future full-price audience, and the campaigning against BP was getting noisy.”

For companies like BP, “the episode raises questions about their pursuit of non-business goals,” adds opinion writer Chris Hughes. “Companies have a duty to leave the communities where they operate better off. Two responsibilities matter above all: paying people well and not damaging the environment through what they do.”

While BP pays its staff very well, “its much bigger and more urgent responsibilities are to the global community,” Hughes adds. “[Fossil] energy demand is rising, yet the world economy needs to shift as soon as it can to net zero greenhouse gas emissions, as the company acknowledges. That requires adapting BP’s business to giving consumers cleaner sources of energy,” and “there’s no better claim on its budget”.