Repopulating the Mammoth Steppe Could Keep 1.4 Trillion Tons of Carbon Sequestered in Permafrost 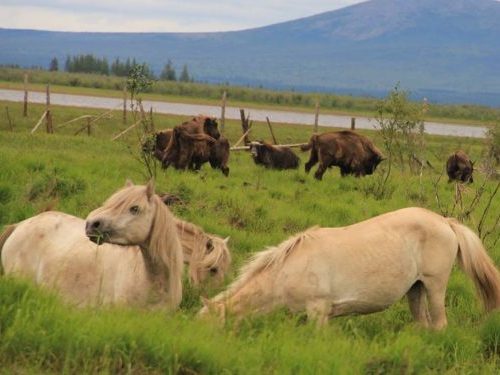 Drawdown lists Repopulating the Mammoth Steppe as a Coming Attraction—one of a collection of climate solutions that are not yet ready for widespread adoption, but should be able to contribute to global decarbonization by 2050. The solution hinges on reintroducing herds of migratory herbivores to the Arctic regions of the world, where vast stores of carbon are locked in the permafrost.

“Permafrost is a thick layer of perennially frozen, carbon-rich soil that covers 24% of the Northern Hemisphere. Perma indicates permanence, except it is thawing as the world warms, releasing greenhouse gases from defrosted ground,” Drawdown explains. “A vast grassland ecosystem called the mammoth steppe once spanned the regions where permafrost is found. Today, herbivores no longer roam, and steppe has been replaced by taiga forest and mossy tundra.”

The summary explores the work of two Russian scientists, Sergey and Nikita Zimov, a father-and-son duo who’ve reclaimed part of the permafrost, planting it with grasses and populating it with herds of bison, muskox, and wild horses. In this Pleistocene Park, the Zimovs are testing a radical hypothesis: When migratory herds nose up the snow to get to the grasses beneath it, they expose the soil to frigid air, a temperature dip that could keep the ground frozen despite a warming climate.

The Zimovs want the idea to catch on throughout the frozen regions of Russia and North America. The aim is to prevent the release of 1.4 trillion tons of carbon currently sequestered in the now-thawing permafrost—double the amount contained in all the forests in the rest of the world.