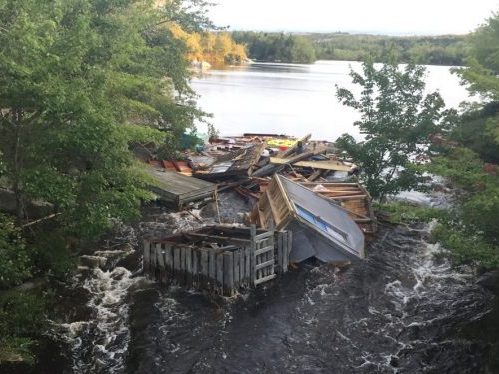 The 23-kilometre land link that connects Nova Scotia to the rest of Canada is at risk as climate change drives up sea levels and makes severe storms more frequent.

“As storms like [Hurricane] Dorian become more common, there is one area that’s being considered especially vulnerable, the Chignecto Isthmus,” Global News reports. “It is described by the United Nations as one of the most vulnerable spots in North America for both the rising tide and storm surges.”

The isthmus, currently protected by a system of dikes and aboiteaus, is expected to see about a metre of sea level rise over the next eight decades. And “there is not a lot of elevation between that water and where we are standing,” said Amherst, NS Mayor David Kogon, speaking from a coastal information centre near the Minas Basin. “Which is why this area is in such peril if there’s a storm surge, or if the sea level rise becomes more significant.”

Local farmer John Atkinson is already concerned about a local dike and its ability to protect his land along the LaPlanche River, telling Global that the foreshore around the old Amherst wharf has lost 15 to 18 metres to erosion in recent years.

“Those dikes are constantly under pressure from both wave energy from strong tidal currents, and also ice and other debris banging into them,” said Mount Allison University coastal geographer Dr. Jeff Ollerhead.

But “the agencies that are in charge of maintaining the dikes have to work with relatively small budgets for the amount of dikes they have to maintain,” he told Global. “So they have to strategically decide what to protect.”

Ollerhead added that a particularly powerful storm or tide would run over the dike and flood the area. “It’s not if it happens,” he said. “It will happen. It’s just a statistically question of when.”

Kogon said that kind of climate event would affect the C$50 million in truck traffic that crosses the isthmus every day. “The impact on Nova Scotia would be enormous,” he said. “You could technically cut off Nova Scotia from mainland Canada.”