More Than 10,000 Attend Environment Debates in 95 Ridings Across Canada 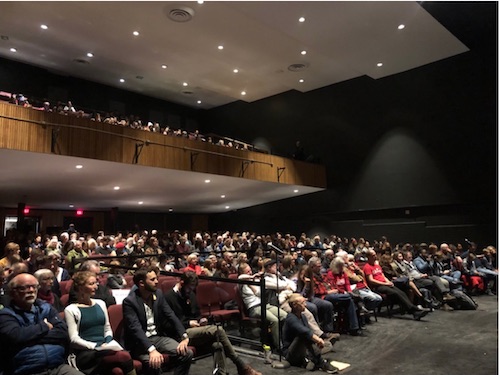 More than 10,000 voters attended nearly 100 all-party environment debates last night in federal ridings across the country. Ottawa Centre took early honours as the best-attended event, with more than 800 in the audience.

“Voters will hold individual MPs from all parties to account in the next Parliament,” added Yukon debate organizer Davon Callander. “We don’t want party speaking points, we want to see that each MP will make sure their party is doing much more to create a safe climate and a healthy environment.”

In a release this morning, GreenPAC reports the debates drew 96% of the Liberal candidates in participating ridings, 39% of Conservatives, 79% of New Democrats, 96% of Greens, 43% of People’s Party candidates, and 100% from the Bloc Québécois. Local events also drew five federal Cabinet ministers, Green Party leader Elizabeth May, and Independent MP Jody Wilson-Raybould.

Of the more than 100 debates across Canada that gave the project its name, GreenPAC says a handful have yet to take place in the course of the week.

In downtown Toronto, the Liberal, NDP, and Green candidates all agreed that climate change “is an existential crisis that requires immediate action from members of all parties,” the Toronto Star reports.

“We need to find a way to move the environment away from being a partisan issue to a shared national challenge,” said Liberal candidate Chrystia Freeland, who served as foreign affairs minister in the Trudeau government.

“We need to put leaders in a room together to work out a climate change plan that they all agree upon,” said Green candidate Tim Grant. “Thereafter climate change will no longer be a political football in this country. That’s gotta be the first (thing).”

In Kenora, candidates mostly agreed on two crises—climate change, and a decades-long history of mercury pollution at Grassy Narrows First Nation—as local priorities. But not entirely.

“I think it’s just nothing but a fast cash grab for the government and another forum for the bureaucrats to put more money in their pocket,” Independent candidate Kelvin Boucher-Chicago said of climate action. “The dinosaurs lived through it, and they didn’t live through it because they didn’t know how to deal with it. At that time, they didn’t have brains, ether. But today, not really much has changed. We don’t have brains, either. We’re still driving cars. We have to find ways to adapt. We can’t change it, we can’t stop it.”

Local debates in Alberta drew on concern that the conversation about climate and energy is becoming too polarized. Calgary Centre debate organizer Deborah Wong, advocacy manager with Engineers Without Borders, “argued climate discussions don’t have to be this way, and hopes to ask candidates how their parties will transition to clean energy resources and protect workers in a more diversified economy,” Star Calgary reported in the lead-up to the debate.

“I don’t think those two are mutually exclusive,” she said. “I don’t think climate change should be on the back burner any more. I think this is the issue the federal election should really be focused on.”