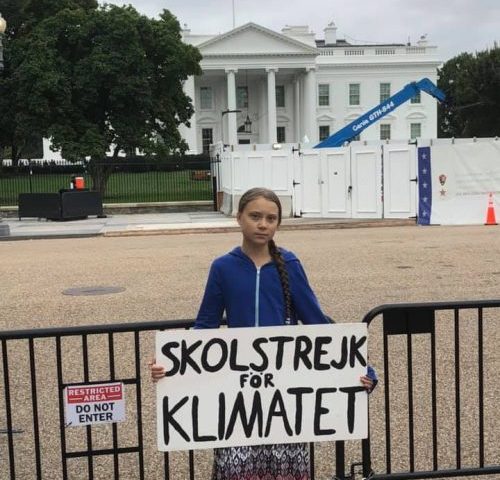 58 weeks into the global school strike movement for which she’s served as a focal point and an inspiration, #FridaysForFuture founder Greta Thunberg is drawing strong reactions from multiple directions, becoming a recipient of the 2019 Right Livelihood Award while fending off increasingly strident attacks from online deniers.

Last week, the Right Livelihood Foundation in Sweden named Thunberg one of four recipients of the award that is also known as the alternative Nobel Prize, Reuters reports. She won “for inspiring and amplifying political demands for urgent climate action reflecting scientific facts,” the Foundation said. “With the 2019 Right Livelihood Award, we honour four practical visionaries whose leadership has empowered millions of people to defend their inalienable rights and to strive for a liveable future for all on planet Earth.”

Last week, the Toronto Star carried an account of how Thunberg, 16, became the face of a global movement. The story cites a Facebook post earlier this year, where Thunberg recalled winning a Swedish newspaper’s writing competition about the environment in May 2018.

“Her article was published, and afterwards Bo Thorén from Fossil Free Dalsland reached out to her to ask her to meet with other young people and discuss ideas for bringing attention to the climate crisis,” the Star writes. “One of Thorén’s ideas was a school strike, inspired by students in Parkland, FL, who refused to go to school after the mass shooting in Marjory Stoneman Douglas High School.”

“I liked the idea of a school strike. So I developed that idea and tried to get the other young people to join me, but no one was really interested,” Thunberg recalled. When the group decided to go in a different direction, she began planning her solo school strike outside the Swedish parliament, which began in August 2018—even though her parents were initially against the plan.

“Sometimes NOT doing things—like just sitting down outside the parliament—speaks much louder than doing things,” she wrote in February. “Just like a whisper sometimes is louder than shouting.”

Alongside the global outpouring of support Thunberg has received—some of it captured in the Star article—right wing critics and climate deniers have become increasingly vicious as her profile and influence have increased. They’ve mocked her for her diagnosis of Asperger’s, a condition on the autism spectrum that she sees as a strength that gives her greater ability to focus and sort through spin. But they can’t quite seem to decide where she places on the political spectrum, trying to label her everything from a Nazi to a Maoist. “She has previously shrugged off personal attacks, characterizing them as attempts to divert attention away from the issue of climate change,” the New York Times reports.

“Greta has said from the start that people attack her because they can’t attack the science; that seems undeniable,” said 350.org co-founder Bill McKibben. “The attacks reveal the hollowness—intellectual and moral—of the climate-denying right.”

On Vox.com, veteran climate writer David Roberts says the attacks aren’t working. “She keeps the focus on science, and they hate it,” Vox notes.

“What’s remarkable about this is not that the right-wing slime machine has gone to work against a new progressive threat,” Roberts writes. “That’s what it was made for. What’s remarkable is how ineffective it’s been, how little it has affected Thunberg and her extraordinary influence.”

In fact, from the extraordinary moment when Fox News apologized for an attack on Thunberg by now-former guest Michael Knowles of the right-wing tabloid Daily Wire, to People’s Party of Canada leader Maxime Bernier having to apologize after calling her “mentally unstable”, many of the attacks have rebounded on the attackers.

“I honestly don’t understand why adults would choose to spend their time mocking and threatening teenagers and children for promoting science, when they could do something good instead,” Thunberg tweeted last week. “I guess they must simply feel so threatened by us.”

“It’s important to note, as she frequently does, that Thunberg has not single-handedly created this movement,” Roberts adds. “She stands on the shoulders of generations of activists before and alongside her, many of them people of colour, who are, to say the least, less likely to be adopted as icons by Westerners.”

At the same time, Thunberg “has proven extraordinarily potent in crystallizing and focusing what has been a somewhat diffuse activist energy. She has brought a directness and simplicity to the movement that has been lacking. Her influence is growing, even as the right ramps up its barrage, and it is driving them out of their minds.”

One specific strength: when Thunberg ignores the social cue from adults who aren’t acting as though climate change is a crisis, she sends a social cue of her own. But ultimately, “Greta’s power will be in making more Gretas,” Roberts writes.

“She is in fact a human being, one 16-year-old girl, and she cannot remain forever in the strange social position where she finds herself. Sooner or later, she’ll do something, join something, or say something that forces her out of the improbably apolitical space she now occupies—and the public tends to be unforgiving of females who disappoint their expectations, even young white ones. No human being can survive the full intensity of the right-wing smear machine undamaged.”

So “if Thunberg is to have a meaningful long-term effect, it can’t be through staying in the spotlight. It must come from others adopting some of her focus, determination, and courage, learning to disregard the social pressures that suppress their fear and anger and prevent them from speaking up, connecting, and finding hope in one another. It will come from others, especially those in positions of power, listening to her and treating the threat to her generation’s future as a crisis.”