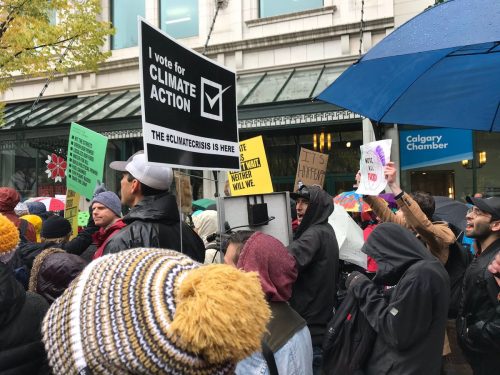 Week three of Canada’s federal election saw a flurry of climate, energy, and environment promises from the four national party leaders, coinciding with a major United Nations climate summit in New York, dozens of successful #ClimateStrike marches across the country, and the latest IPCC report laying out the devastating impacts the climate crisis is wreaking on the world’s oceans and ice cover.

On Wednesday, Liberal leader Justin Trudeau committed to a net-zero target for Canada’s carbon emissions by 2050, even though the country is still (at least) 79 megatonnes short of a 2030 carbon reduction target that Trudeau has called a ceiling, not a floor on the country’s climate ambition. A day later, he promised interest-free energy retrofit loans of up to C$40,000 for an estimated 1.5 million Canadian homes.

Climate hawks greeted the net-zero promise with cautious optimism, CBC reports. “The 2050 pledge is meaningful because you are kind of setting up the North Star,” said Greenpeace Canada senior energy strategist Keith Stewart. “It takes it from being the Liberal, or Conservative, or NDP target to being a Canadian target. It’s no longer a tribal thing.”

“It sends out a very clear signal to actors—companies, investors, consumers—who need to make longer-term decisions,” added Michal Nachmany, research fellow at the UK’s Grantham Research Institute on Climate Change. “It provides certainty, and that’s really good for the economy.”

But CBC warned the promise could put a re-elected Liberal government on a “collision course” with the provinces. “The devil will be in the details, but this promise seems most likely to impact provincial (greenhouse gas reduction) frameworks,” said Sander Duncanson, a Calgary partner with  the law firm Osler, Hoskin & Harcourt who specializes in environmental and regulatory law.

In the course of the week, Green Party leader Elizabeth May called the election a referendum on climate change, and said a Green caucus in a minority parliament would not support any government that proposed to complete the Trans Mountain pipeline expansion. NDP leader Jagmeet Singh promised 300,000 jobs through a $15-billion climate plan that would include ending fossil fuel subsidies, CBC reports. Singh also proposed a Canada-wide clean energy corridor and electrified transit, cited housing affordability and climate change as elements of a “new deal” for British Columbia, and said New Democrats would continue fighting the Trans Mountain project and set up a $40 million coastal protection fund that “would be used to defend wild salmon, remove derelict vessels, [fund] coastal cleanup, and improve Coast Guard equipment and training,” iPolitics states.

Conservative leader Andrew Scheer proposed a Canada-wide energy corridor of his own, devoted to moving oil, gas, hydroelectricity, and telecommunications across the country. “The party says the corridor would minimize environmental impacts, increase certainty for investors, and create jobs,” CBC reports. “Scheer did not specify on Saturday what projects or infrastructure could be part of this corridor.”

Meanwhile, The Canadian Press Baloney Meter was hard at work on Scheer’s assertion that carbon taxes have been “proven to fail”, concluding the “mostly inaccurate” statement is “a lot of baloney” but contains elements of truth.

National Observer reports the Canadian Association of Petroleum Producers has been collecting deep demographic data on its supporters since July 2018, then poured tens of thousands of dollars into sponsored Facebook posts linked to its “pledge to Vote Energy” in the federal election.

“Experts consulted by National Observer said such data could be used to shape public opinion,” write reporters Fatima Syed and Emma McIntosh. “By ‘micro-targeting’ members of the public who the data suggests will be sympathetic to CAPP messaging, the lobby could build a network of industry-coordinated grassroots support in key battlegrounds in the federal election, the experts said.”

“Canada’s largest youth climate event has…been deliberately designed to be a non-partisan, electorally agnostic affair, with organizers wary of any heated rhetoric about the biggest issue of the campaign,” Syed writes. Across the country, student groups “have vetted every speech and advertisement and social media post to ensure no partisan message or allegiance is made evident. Everything they had doubts about was sent and checked by legal experts across the country.”

“We’ve just been proceeding with caution,” said Allie Rougeot of #FridaysForFuture Toronto. “Because we’re a youth-led movement, we recognize that it’s not necessarily our place to tell people how to vote. We are here to show the gap between what the science tells us to do and what’s actually being done.”

“In an ideal world, the climate crisis wouldn’t be a partisan issue, but it has been made a partisan issue by every single party in Canada,” added Climate Strike Canada organizer Harrison Johnston in Vancouver. “I’m disappointed by that.”