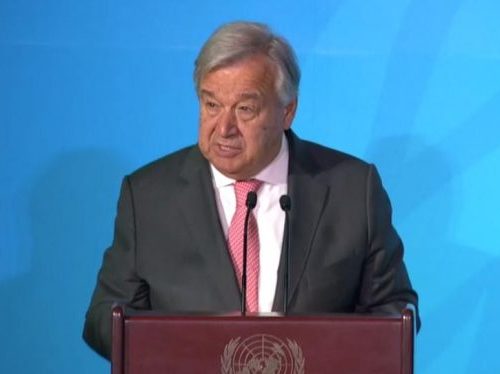 The tepid results of last week’s United Nations Climate Summit pointed to the need for political will to match the urgency of the climate crisis, the opportunities in climate solutions, and rising public demand that governments take action, E3G co-founder and CEO Nick Mabey writes for Climate Home News.

“People are fired up for action from those with power and authority. Unfortunately, the lukewarm outcomes from the UN Climate Action Summit give little faith that the mercury is rising in the halls of power,” Mabey writes.

“Developing countries, in their dozens but with tiny emissions, did their best to set an example,” adds Climate Home Editor-in-Chief Karl Mathiesen. “Russia finally joined the Paris Agreement. But the EU, China, and India made no big moves. The U.S., Australia, Japan, Saudi Arabia, and Brazil said nothing at all.”

The summit “also left many observers and diplomats dismayed or disillusioned, with Secretary General António Guterres’ political acumen being privately questioned by some UN insiders who saw the meeting as counterproductive. (Guterres disagreed, calling it a ‘boost’ for global action),” Mathiesen says.

But in the end, Mabey observes, “despite the UN secretary general going far beyond the usual diplomatic niceties –only allowing leaders announcing real commitments a platform—the response from major polluters was virtually non-existent. If solutions are cheaper, public opinion is mobilized, and impacts much clearer, why is political action not following?”

Coming up with the right answer to that question will be crucial, since “there is no time to fight the wrong political battles,” Mabey writes. And some of the popular wisdom will indeed lead campaigners and public opinion in wrong directions: he notes that “the vast majority of the world’s fossil fuels are owned by countries, not capitalists,” so decisions by governments are an essential focus. And even if climate deniers in the United States and Australia are loud, they no longer have very much influence.

But as last week’s summit unfolded, it became clear that national leaders were distracted by a host of other issues, from Brexit to the Trump-China trade war. “Distracted leaders will require more voices than only schoolchildrens’ to raise the barometer on climate action,” Mabey writes. “Leaders in finance, agriculture, tourism, cities, and real estate know their major economic interests are being damaged by climate change. It’s time they make action on climate change their number one demand when meeting politicians. Diplomats should understand that unless climate change is tackled effectively there will be no other geopolitics to manage.”

Likewise, “climate action delayers need to be convinced that going slowly is no longer economically safe. Companies resisting change must face pressure to show they are fit for a low-carbon world, or investors will take their money elsewhere. Shareholders and savers need to use the courts to challenge bad decisions by managers of their money. Proposals like the Green New Deal can address the legitimate fears of workers that they will be left behind.”

Mabey notes that the summit “triggered the diplomatic starting gun for the next set of critical climate decisions coming in 2020 at COP 26 in Glasgow,” where governments are supposed to table their commitments for faster, deeper greenhouse gas reductions under the 2015 Paris Agreement.

Mathiesen cites several contacts attending the summit who told Climate Home that 2020 is now more important for climate action than ever. “But they aren’t talking about the big moment for revisiting national climate pledges scheduled by the Paris Agreement,” he writes. “All eyes are now on the U.S. election next November,” after “this week exposed how little major and emerging economies are willing to do on climate change without the world’s richest country leading the way.”