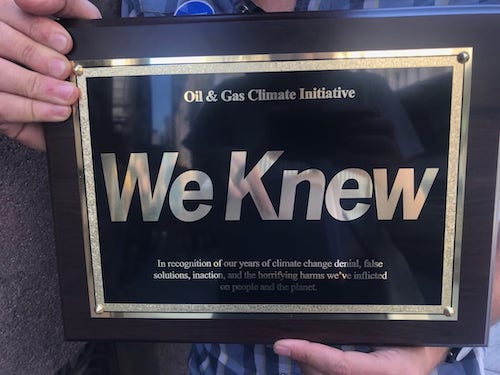 The night before #FridaysForFuture founder Greta Thunberg lashed Climate Action Summit delegates with her generation’s searing sense of betrayal over the climate crisis, a private dinner of the Oil and Gas Climate Initiative received a warm welcome from UN Secretary General António Guterres—who’d spent months urging governments to show up in New York with tangible carbon reduction commitments, and worked to assure a prominent spot for Thunberg during the summit.

“The ticket to enter today’s #ClimateAction Summit is not a beautiful speech, but a concrete plan,” Guterres tweeted Monday. “Acting together, we will leave no one behind.” But the night before, his representative “endorsed the industry’s efforts to shape and influence climate policy,” HEATED reports.

“Tonight, I think it’s best that I not speak for Bob Orr—but in fact for my boss, for António Guterres,” said Special Advisor Robert Orr, adding that his message was “intended as a strong encouragement of your efforts.”

HEATED has the full text of Guterres’ welcome to the international fossil gathering. “Global challenges require global solutions, and I welcome the collective power OGCI has been building since its launch five years ago,” he said in part. “Everyone, in every sector, must do more,” and “your industry has the assets and the expertise to demonstrate the ambition we need and to lead the way. The world needs, and is demanding, an ambitious road map to reduce the carbon intensity of your industry, and to demonstrate your commitment to align with the goals of the Paris Agreement.”

HEATED founder and publisher Emily Atkin says the youth participants with whom Guterres made common cause in the lead-up to the summit were none too pleased to see him politely asking for help from the industry that spent US$2 billion and a couple of decades funding climate denial.

Atkin talked to Xaver Kandler, who was in the room clad in the suit he wore for his high school graduation, one of several protesters disguised as guests and hotel staff while they recorded the OCGI event on their phones. “If all had gone to plan, the activists would have stormed the stage, and presented the CEOs of ExxonMobil, BP, Shell, and others with laminated plaques reading ‘We Knew—in recognition of our years of climate change denial, false solutions, inaction, and the horrifying harms we’ve inflicted on people and the planet’,” she writes. “But the group was discovered by event security guards and delivered to New York City Police Department officers before they got the chance.”

Atkin asked Kandler why the UN Secretary General shouldn’t ask colossal fossil CEOs to take more aggressive action on climate change. “The problem, he said, lies inherently in the fact that it’s an ask,” she writes. “Given the dire nature of the climate crisis; the fact that fossil fuels are the main contributors to it; and the fact that fossil fuel corporations have spent more than $2 billion over the last two decades delaying climate action while knowing the consequences of inaction; Kandler said aggressive emissions reductions should read more like a demand.”

But at the Sunday dinner, the fossil execs spent their time “discussing the UN as an institution that served them,” he said. “They kept bringing up their close relationship with [Guterres], and how they have this working relationship to make sure they’re part of the solution.”

And OGCI isn’t the only pressure point: Citing news reports earlier this year, Atkins notes that “fossil fuel interests have been quietly undermining international climate talks for decades,” to the extent that the term “fossil fuels” doesn’t show up once in the Paris Agreement.

“Companies been allowed to sway these talks because the UN’s rules entitle them to,” Atkin adds. “And though oil companies insist they are not trying to obstruct climate action, activists have a hard time believing them. After all, the same companies leading the Oil and Gas Climate Initiative have approved $50 billion of projects in the last year that won’t be economically viable if governments implement the Paris accord.”

Corporate Accountability Press Secretary Taylor Billings said the time for a friendly working relationship with fossils is over. “Until governments and the UN realize that trying to put the fire out with the arsonists in the room will not work,” she told the Guardian, “we risk letting another year go by without adequate action on climate change or supplanting real solutions with fossil-fuel-industry-driven schemes.”