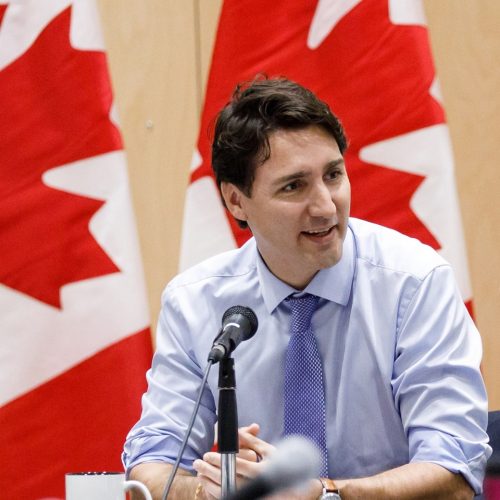 “It’s an ambitious target, but it’s doable,” Trudeau said at a campaign event in Burnaby, B.C.

Adopting a 2050 net-zero target would mean “joining the European Union and countries making the same climate pledge at the United Nations in New York City this week,” CBC reports. The Liberal Party “says the net-zero plan would be based on the advice of scientists, economists, and other experts, as well as consultations with Canadians. To date, there have been few details on how those targets will be met, but Trudeau said other announcements will roll out through the week.”

The Liberals are also promising to exceed the country’s existing, Harper-era carbon reduction goal for 2030. While Trudeau and Ottawa Centre Liberal candidate Catherine McKenna repeatedly described that target as a floor, not a ceiling for Canada’s climate ambition during their terms as prime minister and environment minister, respectively, the country is currently about 100 megatonnes short of achieving it.

The Liberal plan would cut taxes for clean technology businesses in half—from 9% to 4.5% for smaller firms, and from 15% to 7.5% for bigger companies. “Eligible sectors could include manufacturing related to renewable energy, production of renewable fuels, zero-emission vehicles and batteries for them, carbon capture and removal technology, and electric vehicle charging systems,” CBC states.

“Trudeau is also announcing a Liberal government would ensure all federal buildings run on clean electricity by 2022, and that the government would strengthen green procurement policies and leverage bulk purchasing power to drive clean technology,” the national broadcaster adds. “Trudeau said climate change is the great global challenge of the age, and tried to frame the choice Canadian voters have to make in the upcoming election as one between ambition and complacency.”

“Do you want to be represented by a team that has a serious, ambitious plan that is committed to do more, or do you want a team of climate deniers with no long-term vision for Canada’s environmental and economic future?” he asked.

During a campaign stop in Ottawa Centre, McKenna agreed the election presents Canadians with a stark choice on climate policy.

“Conservative politicians want to stop this progress,” she said. “They want to follow (Ontario Premier) Doug Ford’s example, where it’s free to pollute, where we cancel programs that are helping businesses, schools, hospitals, people save money and do right by the environment.” Which is ” exactly what Andrew Scheer would do, too,” she added.

McKenna acknowledged the Liberals don’t have a fully-formed plan for hitting carbon neutrality by mid-century, adding that those details would come from the expert panel a re-elected Liberal government would convene. “We may not know exactly how to get there, but that’s the same for all the countries that have committed to this, and the businesses,” she said. “But we will figure this out, and the way we will do this is by having a serious climate plan with credible and pragmatic action, by listening to the experts and, most of all, listening to young people in the streets who are saying, ‘Are you going to act for our future?'”