‘How Dare You?’ Thunberg Demands, as UN Climate Summit Gets Under Way 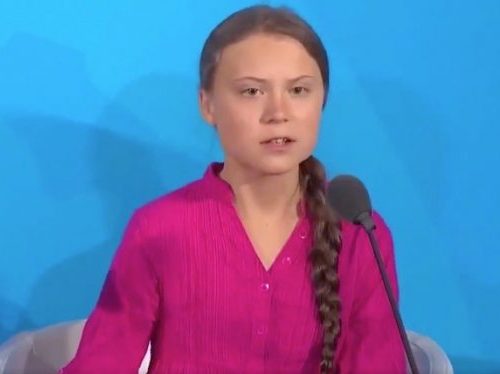 “How dare you?” was the question multiple media reports took away from Monday’s opening session of the United Nations Climate Action Summit, where #FridaysForFuture founder Greta Thunberg of Sweden was invited to the opening panel by UN Secretary General António Guterres.

“This is all wrong,” Thunberg said. “I shouldn’t be up here. I should be back in school on the other side of the ocean, yet you all come to us young people for hope.”

When adults are the ones who should have taken action long ago, “you have stolen my dreams and my childhood with your empty words,” she told summit participants. “People are suffering. People are dying. Entire ecosystem are collapsing. We are in the beginning of a mass extinction, and all you can talk about is money and fairy tales of eternal economic growth. How dare you?”

“For more than 30 years, the science has been crystal clear,” Thunberg said. “How dare you continue to look away and come here and say you’re doing enough when the politics and solutions needed are still nowhere in sight? You say you hear us and that you understand the urgency, but no matter how sad and angry I am, I do not want to believe that, because if you really understood the situation and still kept on failing to act, then you would be evil, and that I refuse to believe.”

She closed with the warning that “you’re failing us, but the young people are starting to understand your betrayal. The eyes of all future generations are upon you. And if you choose to fail us, I say, we will never forgive you.”

Later in the day, Thunberg and 15 other youth filed a legal complaint against Argentina, Brazil, France, Germany, and Turkey with the UN Committee on the Rights of the Child. They said the countries “have known about the risks of climate change for decades, but have failed to take sufficient action to curb their emissions,” the Washington Post reports. “The petitioners range in age from 8 to 17 and hail from Argentina, Brazil, France, Germany, India, the Marshall Islands, Nigeria, Palau, South Africa, Sweden, Tunisia, and the United States.”

On Monday, Grist profiled some of the “other Greta Thunbergs” participating in the UN Climate Summit.

On Monday, as well, what the Washington Post called a “broad coalition of climate activists” created traffic snarls in the U.S. capital, in a protest timed to coincide with the summit. “It’s Washington, D.C. The decisions that are made in this town don’t just affect the people in the U.S., they affect the globe every day,” explained Liz Butler, vice president of organizing and strategic allegiances for Friends of the Earth Action. “I think people around the world are counting on us to be able to stand up in DC.”

In a post that evening, Mike Tidwell, executive director of the CCAN Action Fund, explained why he’d joined the traffic protest. “Stepping into the middle of Independence Avenue SW in Washington, determined to block rush-hour traffic with dozens of other protesters, is not my natural comfort zone,” he wrote, after introducing himself as a father, a Sunday school teacher, a youth baseball coach, and an Eagle Scout. But “I’ll just be blunt: Global warming has radicalized me. It’s radicalizing young people all around us, too. Perhaps you’ve noticed…And now, I submit, it’s your turn to become radical, whoever you are, wherever you live. That’s because the climate threat is now truly radical, and time is almost up.”

He added that “perhaps we ruined your commute. For that, I am truly sorry. But it was for a higher cause.”