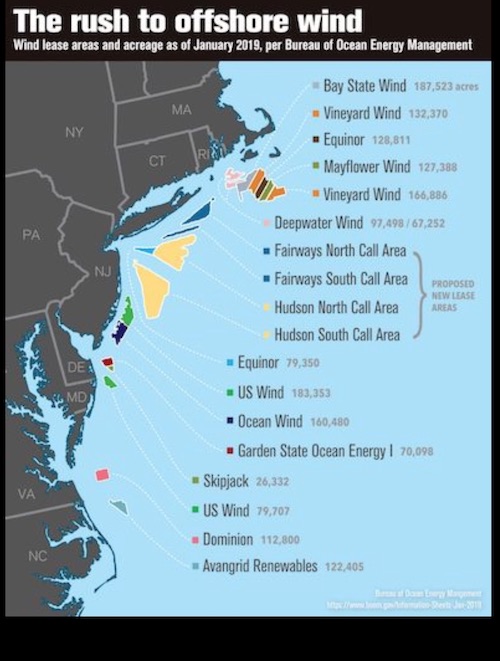 The Bulletin of the Atomic Scientists is out with a detailed, exquisitely-designed and -illustrated look at the offshore wind boom now getting under way off the east coast of the United States.

Deputy Editor Dan Drollette recounts his trip to Block Island, where Rhode Island launched construction on an initial test project in the summer of 2015 and began generating power in December 2016. For Drollette, it’s almost a trip home, to a place where his family spent summer weekends when he was growing up.

The context for the article is the newfound affordability and stunning growth of offshore wind, in the United States and elsewhere. “On a global level, offshore wind power has been quietly taking off in a big way, partly because of concerns about carbon emissions, but also because of massive changes in technology,” he writes. “A new generation of high-efficiency, lightweight, ultra-modern designs has emerged, using the latest in carbon-fibre technology to make truly immense windmills—towering as much as 600 feet above the ground, or about twice the height of the Statue of Liberty as measured from the bottom of the statue’s pedestal to the tip of its upraised torch. Some windmills have individual rotor blades that are 270 feet long—the same as the wingspan of the world’s largest commercial plane. Just moving a single rotor blade of that size from the factory to its final destination is a challenge.”

In the U.S. Northeast, “after decades of false starts and tangled litigation, a sea change appears to be occurring for offshore wind in the United States, as this country races to catch up with Northern Europe, where this renewable energy source has become increasingly mainstream and increasingly cheap,” Drollette adds. “A 2015 U.S. Energy Department study predicted that America’s offshore wind production will grow from 30 megawatts today to 22,000 MW by 2030, providing as many as 80,000 American jobs. Literally billions of dollars are at stake. And these offshore wind projects could have a big impact on the environment,” cutting emissions by the equivalent of 270,000 gas-powered cars and playing “a key role in reducing the region’s climate change footprint”.

Drollette surveys the state of play in the global offshore wind business, the political opposition the technology has faced from “fossil fuel-friendly regulators in Washington, DC”, and the local reaction on the small vacation island that seems to have made a decisive difference in bringing offshore wind to the U.S. A sidebar to the main feature traces the “long, twisted story of U.S. politics and offshore wind farms” to 2001, when the ill-fated Cape Wind project off the Massachusetts shore produced one of the few Not In My Back Yard (NIMBY) moments when the powerful Kennedy and Koch dynasties actually agreed on anything.

Despite the “visceral dislike of the sight of windmills on the horizon among those in the upper-income tax brackets” in the U.S., Drollette found growing support for the project on Block Island. He reports on an interview with Jessica Willi, executive director of the Block Island Tourism Council, who shared the results of a three-year public opinion study by the University of Rhode Island.

The research by cultural anthropologist Amelia Moore “began when the turbines were just being put in; now that several full tourist seasons have gone by, results were starting to come in about the effect on the ‘viewshed.’,” he writes.

“When a company is talking about coming in and building a wind farm offshore, and the powers-that-be say ‘not in my backyard because it’s going to affect tourism,’ they can show the study…and the end result, if anything, [showed] it probably improved tourism,” Willi said.

Apart from the 100 or so tourists who come to the island each year to see the wind farm, “we have 1.3 million visitors a year, so it’s not like a huge percentage of people, it’s not making or breaking the economy,” she added. “99.5% of people tell us it’s not affecting their visit to Block Island. So it’s probably a net wash.”

That neutral outcome came as a relief, Drollette says, since “tourism revenues provide much of the money the town needs for roads, schools, health care, emergency services, the town library, and just about everything else. Whether it’s day-trippers or full-time summer cottage people, it’s those 1.3 million yearly tourists to Block Island who pay the taxes that support the community, not the tax revenue from the island’s thousand or so year-round residents. An increasing number of those tourists have been coming from the wealthiest 1% of the population—so there were legitimate worries about what they would think of a wind farm in the viewshed.”

Based on several dozen local interviews, from the formal to the off-the-cuff, Drollette concludes that “the general rap against wind power was wrong, at least in this instance. On Block Island, the wind farm was pretty dependable as a source of energy, and the undersea power cable that accompanied it had provided a vital umbilical cord to the mainland, allowing the reliable source of power that islanders had long wanted. While prices had not gone down as much as people had hoped—partly due to the costs of putting up a substation and all the ensuing island infrastructure—Block Island was no longer one of the two most expensive places in the United States for electricity. If nothing else, wind had turned out to be more reliable than ferrying barrels of diesel fuel to a generator located on an island 13 miles out to sea.”

After all those interviews, “if there is a common thread to the comments, it is that the windmills are quiet and distant, and that with a steady and predictable source of power, islanders no longer have to worry about blackouts or brownouts,” he adds. “With modern appliances, the latter is almost as bad as the former, because these days so many appliances are ‘smart’ and contain microchips in some way, shape, or form—meaning that many furnaces, stoves, microwaves, refrigerators, windows, doors, alarms, power supplies, and the like (not to mention desktop computers) are seriously disrupted when the power is low, leading to frozen pipes, flooding, or worse.”

At one point in his interviewing, Drollette visits the town library and gets a run of about a dozen positive comments that stream in so quickly that he almost suspects he’s being set up. “I’m a YIMBY about it, not a NIMBY,” declares one local resident.

“As I leave the building, the librarian shows me a photo on her iPhone of a quilt she had made of the island,” he writes. “It gives an aerial view, with a decorative element—five little white windmills—on its lower right side. Whether the quilt could be called quaint, exactly, probably depends on one’s point of view.”