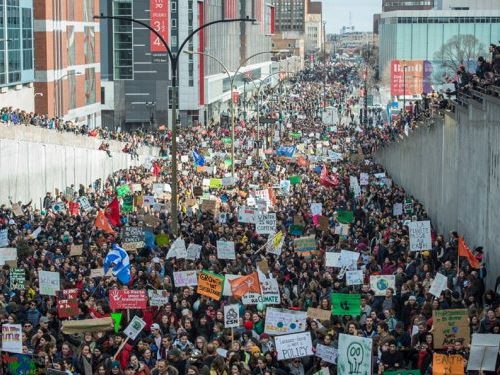 High school and post-secondary students, employees, businesses, scientists, and city governments are all stepping up to take part in a global strike for climate action that could mark a turning point in the mounting campaign for faster, deeper reductions in the greenhouse gas emissions that are feeding the climate crisis.

“With millions of people pouring into the streets to demand emergency climate action and to demonstrate collective grief over climate breakdown, this is definitely a watershed moment,” said climate organizer Tina Yeonju Oh, who was named one of Canada’s top environmentalists under 25 in 2017. “It’s so powerfully necessary for people to take back public spaces, like the streets, and to demand that we can’t do business as usual. Because, frankly, business as usual is destroying the planet.”

“I’ve had the privilege of being part of every big climate mobilization that there has been,” agreed 350.org founder Bill McKibben. “So, I think I’m in a position to say that this climate strike is going to be the biggest day of climate action that Earth has yet seen.”

“For those of us who have been analyzing climate activism, this is an important move toward a politicized generation that understands climate change is the greatest threat to our collective future,” the University of Manitoba’s Joe Curnow writes on The Conversation.

The Toronto Star reports plans for 3,500 events in 150 countries today. On Tuesday, #FridaysForFuture founder Greta Thunberg tweeted a count of 4,638 events in 139 countries, and on all seven continents. “Everyone is welcome. Everyone is needed. Find your closest strike or register your own,” she wrote.

The Star reports that the New York City Department of Education “has given permission to 1.1 million public school students to skip school to join that city’s protest, one of more than 800 events happening in the U.S. alone. Further strikes are planned for September 27, including in Toronto, Vancouver, and Montreal, where Thunberg will be in attendance.”

The Canadian Press says the University of British Columbia, Montreal’s Dawson College, and the Toronto District School Board are “among the institutions taking measures to support students who plan to walk out of class as part of a global call to action.” The TDSB is asking schools to avoid scheduling tests and other assignments September 27, though students under 18 will still need a parent’s note to skip classes.

“We see this particular rally as global, as starting from students and generated further by students, and we see it as one that we should consider with parents and with students in terms of their participation,” said Director of Education John Malloy.

UBC encouraged students to discuss their absence with instructors in advance, and asked faculty to let students know if they don’t plan to be in class. “This strike is a student-led initiative and we acknowledge that many of our students and community members care deeply about this issue.” the university said. “It is inspiring to see so many students take part in shaping their future and use the power of the collective voice to raise awareness of climate change and the need for immediate action.” Some students took UBC to task for not closing down completely for the strike, CBC reports.

In Montreal, Concordia University, Dawson, and the Commission scolaire de Montréal (CSDM), Quebec’s largest school board, are all cancelling classes, CBC adds. Quebec Education Minister Jean-François Roberge was the one apparent outlier in the crowd, trying to tell students the best way to fight climate change is to stay at their desks next Friday.

“Of course, the solutions are in the school,” he said Wednesday. “But in Quebec, we have the right to express ourselves to go in the street and say what we want to say,”

In Winnipeg, Manitoba Youth for Climate Action was planning a week of public action, beginning today with a die-in at the Canadian Museum for Human Rights and concluding September 27 with a public strike and march on the grounds of the Manitoba Legislature, the Winnipeg Sun reports.

“We know that climate change intersects with every other major political issue, be it health care, education, violence, poverty, and the economy,” said organizer Lena Andres, a 17-year-old first-year University of Winnipeg student. “You can’t have any of those things without having a planet to live on. So to anybody saying that youth voices aren’t as intelligent or as important as those who have maybe higher education than us, to that I say we’ve had over two million (students) go on strike and it caused quite a ruckus just from walking out of school.

“Imagine what would happen if people walked away from their jobs. We could create a global uprising towards a better future.”

And indeed, much of the online news leading up to this morning’s strike launch shows how far the school strikes’ momentum has carried beyond the classroom.

Fast Company lists about 200 companies that will be closed for part or all of the day today, while #strikewithus identifies about 300 mostly non-profit and community sector partners. Climate News Network cites a statement by Earth League in which 20 eminent scientists—including Lord Nicholas Stern, and Johan Rockström and Joachim Schellnhuber of Germany’s Potsdam Institute for Climate Impact Research—throw their weight behind the protests.

“Humanity may tend to take the benign conditions of the past 10,000 years for granted, but we are already experiencing the highest global mean temperature on Earth since the last Ice Age,” they write. “If anything, there is a growing understanding that expert assessments, which are usually conservative in the best sense of the word, have contributed to allow decision-makers to underestimate—not overestimate—the risks of climate impacts. Now it is apparent that impacts are happening much sooner and more severely than expected.”

“When your house is on fire, somebody needs to sound the alarm,” the mayors write, citing a metaphor popularized by Thunberg. “Young people in our cities, displaying incredible maturity and dignity, are doing just that. Schoolchildren are taking to the streets, drawing attention to the terrifying threat that climate breakdown poses to their future. Young people recognize just how unfair climate change is.,” and “we have an opportunity to show, not only that we hear their message, but that they have inspired us to act even faster.”

C40 adds that “those who have generated the least greenhouse gas emissions, including the poorest, most disadvantaged, and youngest in society, will suffer the worst effects of a rapidly changing global climate. They are right to sound the alarm, and they are right to demand action that tackles climate change and inequality simultaneously.”

Trade unions around the world are backing the strike, Germany is bracing for 500 demonstrations, and the FC St. Pauli football club in Hamburg delighted at least one veteran European climate hawk by trumpeting its support.

“What do Kiezhelden [the club’s social platform], do-gooders, climate protectors, and FC St. Pauli have in common?” the club asks on its website. “We all support the students’ fantastic work, mobilization, and free-time school strikes for a solid and equitable world, free of fossil fuels, based on 100% clean, renewable energy. Including the protection of natural ecosystems, seas, and forests.”