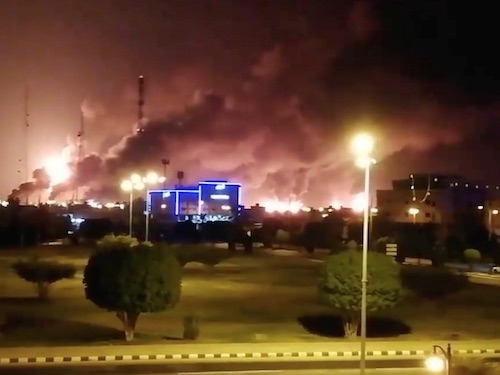 Saudi Arabia’s daily oil output has been cut by half after Houthi rebels in neighbouring Yemen claimed responsibility for a drone strike on what CNN describes as “among the world’s largest and most important energy production centres”.

By Sunday, Donald Trump was threatening military action against Iran, which funds the Houthis, tweeting that the United States is “locked and loaded depending on verification”. Iran denied a role in the strike, after U.S. Secretary of State Mike Pompeo “accused Iran of being behind what he called ‘an unprecedented attack on the world’s energy supply’,” the New York Times reported Saturday.

The attack took out 5.7 million of the 9.8 million barrels of oil that Saudi Arabia produces each day, bin Salman said. Daily global oil production stood at (a deeply sobering) 94.7 million barrels in 2018, according to Statista, and 80.6 million bbl/day so far this year, according to a U.S. Energy Information Administration entry on Wikipedia.

“Yemen’s Houthi rebels on Saturday took responsibility for the attacks, saying 10 drones targeted state-owned Saudi Aramco oil facilities in Abqaiq and Khurais,” CNN writes, citing the Houthi-run Al-Masirah news agency. Subsequent releases said 17 sites were hit, and that the attack may have involved cruise missiles as well as drones—“both and a lot of them,” said one senior U.S. official.

“Preliminary indications are that the attacks likely originated from Iraq, a source with knowledge of the incident told CNN. Iran wields significant influence in southern Iraq, which is situated much closer than Yemen to the affected Saudi sites.”

Iran foreign ministry spokesperson Seyyed Abbas Mousavi responded that “blind accusations and inappropriate comments in a diplomatic context are incomprehensible and meaningless,” Iraq denied the 10 militarized drones were launched from its territory.

But “the administration’s determination that Iran played a direct role in the attack marked a significant escalation in months of back-and-forth tensions between the United States and Iran. It raised questions about how Washington might retaliate—and why Iran would have risked such a confrontation,” the Times wrote yesterday.

“Administration officials said on Sunday they would seek to declassify more intelligence to buttress their case against Iran in the coming days. The satellite photographs released on Sunday did not appear as clear cut as officials suggested, with some appearing to show damage on the western side of the facilities, not from the direction of Iran or Iraq.”

News analysis cast the attacks as an escalation in Houthis’ military capability against Saudi Arabia. “Houthi missiles have struck Saudi sites before, including its oil infrastructure,” the Washington Post writes. “But the latest strike on Aramco was a symbolic blow against the historical hub of the kingdom’s oil riches, and the centerpiece of Crown Prince Mohammed bin Salman’s plans to remake the kingdom’s economy.”

If the Houthis’ claims of responsibility is verified, the paper adds, it “would highlight their rapidly advancing military prowess. Saudi Arabia and the United States accuse Iran of providing the Houthis with military equipment and technical expertise, a charge Tehran has denied.”

Benchmark Brent crude prices rose almost 20% when trading opened Monday morning, “its biggest jump in 28 years’ time,” and “in light of news that the Saudi outage could last for months, this could be just the start,” Oilprice.com reports. “Bloomberg notes that this attack has resulted in the single worst disruption in oil markets ever, surpassing the loss of Kuwaiti and Iraqi petroleum supply in August 1990, when Iraq invaded its southern neighbour. It also exceeds the loss of Iranian oil output in 1979 during the Islamic Revolution, according to data from the U.S. Department of Energy.”

And “with every stakeholder in the Persian Gulf on edge, it goes without saying that any retaliatory action could send crude prices soaring beyond $80 per barrel.

The Globe and Mail notes that Saudi Arabia’s war in Yemen, the Arab world’s poorest country, “has become the world’s worst humanitarian crisis. The violence has pushed Yemen to the brink of famine and killed more than 90,000 people since 2015, according to the U.S.-based Armed Conflict Location and Event Data Project.” In the immediate aftermath of the latest strikes, Bloomberg said analysts and observers have been worrying about an attack on a Saudi oil facility.

“The Abqaiq crude processing plant is the single most important facility in the Saudi oil sector,” the U.S. news agency explained. “Abqaiq is more important to the Saudi oil sector than the kingdom’s Persian Gulf export terminals at Ras Tanura and Ju’aymah, or the Strait of Hormuz that links the Gulf to the Indian Ocean and the high seas. Crude can be diverted away from the Persian Gulf and Hormuz by pumping it across the country to the Red Sea through the East-West oil pipeline. But it cannot bypass Abqaiq. The East-West pipeline starts at Abqaiq and output from the giant Ghawar, Shaybah, and Khurais fields is all processed there, so an attack on the facility will impact crude flows to export terminals on both coasts.”