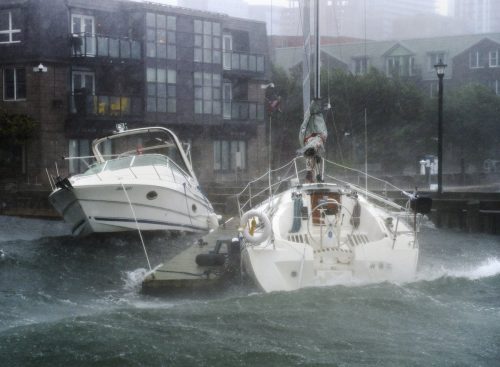 A steady stream of hurricane-force storms has Atlantic Canada rethinking its approach to electricity grids, shoreline defences, and even tree planting, while insurance companies brace themselves for damage claims that are set to double every five to seven years.

“Recent scientific literature says 35 hurricanes—not including post-tropical storms like Dorian—have made landfall in the region since 1850, an average of one every five years,” the Canadian Press reports, in a post republished by the Star Halifax. And “Anthony Taylor, a forest ecologist scientist with Natural Resources Canada, wrote in a recent peer-reviewed paper that climate change is expected to increase the frequency of severe hurricanes.”

“Blair Feltmate, head of the Intact Centre on Climate Change at the University of Waterloo, says Atlantic Canada should also develop standards for coastline resiliency due to predictions of rising sea levels combining with the storms,” CP says. “That would mean a more rapid refurbishing of sea walls and dike systems, along with more shoreline vegetation.”

While the region’s infrastructure agencies begin factoring a future of more frequent, severe storms into their planning, insurers are focusing increasingly on the financial impacts. “The cost of disaster damage has been doubling every five to seven years since the 1960s,” the Globe and Mail writes, citing data from the Institute for Catastrophic Loss Reduction at Ontario’s Western University.

“Before 2010, statistics from the Insurance Bureau of Canada show only one year when catastrophic losses in Canada totaled more than C$1 billion,” when tornadoes struck southern Ontario in early August. “Since 2010, catastrophic losses exceeded $1 billion in every year but one, including $5.1 billion of claims in 2016, the year of the wildfires in Fort McMurray.”

“We saw the canary in the coal mine 10 years ago and we’ve been helping our customers manage the direct effects of increased flooding, fire, and other extreme weather events ever since,” CEO Charles Brindamour told the company’s annual meeting in May. So “we are working with other global insurers, governments, and non-government organizations on climate change.”

That shift includes more than $6 million donated to Feltmate’s centre over the last four years, as well as government lobbying, the Globe notes. As well, “Intact and several other insurers made consumer education a priority, launching campaigns that show homeowners how to waterproof their basements.”

The Globe begins its coverage with the estimated $32 billion in clean-up costs now facing the devastated communities of the Bahamas, where insurance is only expected to pick up about $5 billion of the tab.

“In the dry language of actuaries, the islands of the Bahamas are experiencing what’s known as an insurance gap,” the paper says. “There’s untold human suffering behind that gap, as homeowners, businesses, and governments struggle to find the money for repairs and to restore communities.” But with limited financial exposure to the crisis, “the insurance industry, on the other hand, sailed through the storm.”