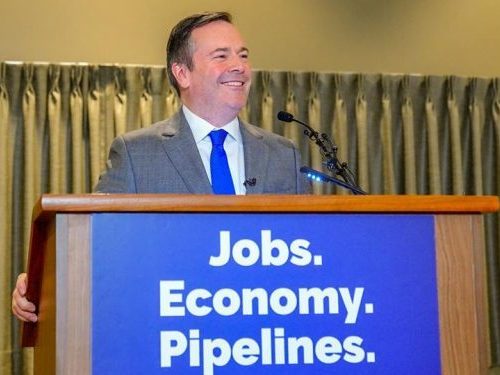 Alberta Premier Jason Kenney is under fire from all sides, after unveiling details of a taxpayer-funded investigation of supposed foreign-funded pipeline opposition that includes an email “snitch line” for Albertans to report allegedly “un-Albertan” activities by their neighbours.

In an open letter earlier this week, Amnesty International Secretary General Alex Neve urged Kenney to drop plans for the inquiry, and for the C$30-million “war room” his government has begun setting up to counter the hostile treatment he believes the Alberta fossil industry is receiving.

“Amnesty International is deeply concerned that these initiatives undermine and violate a range of Alberta’s human rights obligations, under the Canadian Charter of Rights and Freedoms and international law, including freedom of expression, freedom of association, the rights of Indigenous peoples, and gender equality,” Neve wrote.

“Amnesty International is also gravely concerned that these initiatives, and the rhetoric surrounding them, feeds into a worsening climate of hostility toward human rights defenders—particularly Indigenous, women, and environmental human rights defenders—exposing them to intimidation and threats, including threats of violence.”

Kenney, who said he started an Amnesty International club when he was in high school, told CBC he considered Neve’s concerns “beyond ridiculous”, adding that he would “absolutely not” abandon plans for the inquiry and the war room.

Kenney “said Amnesty International should be more concerned about the world’s use of oil from countries with poor human rights records like Saudi Arabia and Russia instead of Canada,” CBC says.

But “Neve argued Kenney’s own government needs to refrain from making accusations that could lead to threats and violence against people who criticize the oil and gas industry.” He asked the Alberta premier to ensure that no public funding leads to “harassment, surveillance, or criminalization of human rights defenders who opposed or criticize [the government’s] energy agenda and its implications for the rights of Indigenous peoples and the global climate crisis.”

While the back-and-forth produced an immediate wave of online reaction—including the decidedly snarky #ReportAnAlbertan Twitter hashtag—Amnesty International wasn’t the only group to take issue with Kenney’s ham-fisted tactics.

“The taxpayer-funded probe into foreign funding of environmental groups delivers everything the staunchest oilpatch backers would want, with the starting point that opposition, be it partly funded by foreigners or not, could make one anti-Albertan,” writes Globe and Mail reporter Jeffrey Jones. “Most worrisome, judging from details published by the government this week, is the apparent open-endedness of the process, its lack of transparency, and the threat that reputations could get impugned by the government, with little apparent recourse for those targeted.”

To Jones, “this looks to be politics masquerading as public policy and, with its anti-democratic tone, threatens to repel as many Albertans as it delights.”

And one of Kenney’s staunchest Calgary allies warned the tactic could backfire. “The device of a full-blown public inquiry, the highest judicial level of impartial public investigation, has never been used before in such an overtly political way,” cautions avowedly pro-fossil Calgary Herald columnist Don Braid. “The campaign against the oilsands and pipelines has been unfair and hugely damaging. It demands a powerful response. But the tools should be political, economic, and legislative—not a special court of investigation.”

Braid seems mostly concerned about the optics of the process. But the features he describes are scary.

“Forcing individual critics to testify can look like an oppressive use of state power. If commissioner Steve Allan decides to hold public hearings, anti-oil groups would have a spectacular showcase for their causes, while claiming to be persecuted,” he writes.

“The inquiry declares itself immune to freedom of information requests, because it is not a ‘public body’,” he adds. “But it can call witnesses and compel testimony, in Alberta and perhaps beyond.”

While he says he’s known Allan long enough to have no doubts about his integrity, “the inquiry itself looks like overreach born of Premier Jason Kenney’s desire to represent and contain the anger that could spill over to some new protest party,” Braid writes. And while he buys into the notion that Alberta has been mistreated [by the rest of Canada, not by a rapidly-crashing global market for a substandard, expensive fossil product—Ed.], “nothing could hurt the cause more than the impression of an Alberta kangaroo court hauling up climate change activists.”

Kenney himself fed that concern while he was in Fort McMurray, telling an audience of fossil executives that “environmental groups might think twice about exercising their right to protest if Alberta took a firmer approach, citing Russian autocrat Vladimir Putin as one example,” Press Progress writes. “The Premier shared one anecdote, claiming Putin sends environmentalists to prison camps in Siberia and [they] are never seen again—Kenney suggested he wouldn’t advocate doing that in Canada, but underlined his belief that Putin’s approach to dealing with environmentalists is very ‘instructive’.”

“They know they couldn’t get away with this in Vladimir Putin’s Russia,” Kenney said. “In fact, Greenpeace did do a protest on an offshore rig in Russia and their crew was arrested and thrown in a Siberian jail for six months, and funnily enough they’ve never been back.”

“I’m not recommending that for Canada, but it’s instructive,” he continued. “They have seen Canada’s wonderfully generous, hospitable, sometimes apologetic Canadian temperament as an invitation for aggression. But folks, that is why it is so important we send a message that Alberta and Canada is now standing up and fighting back.”

That attitude was apparently too much for The Beaverton, which published a faux account of Alberta’s epic takedown of 12 vegans found in an Edmonton restaurant.

“The seven women and five men are accused of 68 counts of possessing climate change material with the intent to spread and 12 counts of disagreeing with the majority of Albertans,” the online satire magazine writes. “One of the members of the cell was found constructing a protest sign with a sassy anti-oil sands slogan that cannot be released due to a court-ordered publication ban on science.”

“These people subscribe to radical prophets like David Suzuki who just hate Alberta,” the story imagines Kenney declaring. “Our oil executives will sleep better tonight knowing these people are behind bars.”

“Meanwhile,” The Beaverton adds, “the Premier called on his province’s American/Chinese/Dutch-owned oil and gas industries to report any foreign interference from environmental groups.”