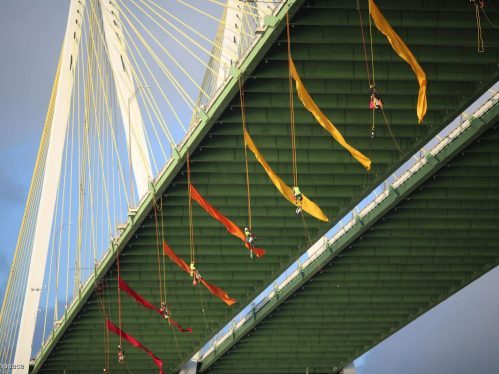 With the Democratic Party in town for its latest candidate debate, 11 protesters from Greenpeace USA partially blocked the Houston Ship Channel, the busiest shipping route in the United States, after rappelling down the side of the Fred Hartman Bridge Thursday morning to protest fossil fuels.

“As we hang here, the Democratic candidates are getting ready for the #DemDebates just a few hours from now here in Houston,” Greenpeace tweeted Thursday morning. “We challenge every candidate on stage tonight to promise to hold the fossil fuel industry accountable if they become president. #PeopleVsOil”

On the scene Thursday morning, “Harris County Sheriff’s Office officials said they are allowing the demonstration to continue as planned until Friday morning, barring any medical emergencies that would require them to pull the protesters to safety,” the Houston Chronicle reports. Assistant Chief Tim Navarre added that the protesters involved with the action “would face state-level charges for at least blocking some lanes on the bridge and for impeding the Houston Ship Channel,” the local paper adds. “Detectives are also working with the U.S. Attorney’s Office to determine if federal charges are warranted.”

Local TV station KHOU 11 reported Thursday night that most of the protesters had been arrested.

“Americans have a right to protest, as long as it’s peaceful and lawful,” said Port of Houston Authority Chair Ric Campo. “Obviously, the protests going on right now are not peaceful and lawful. They blocked the freeway. There was an accident that caused injuries to people on the bridge,” for which local media accounts are blaming the protest.

The protesters pointed to a far bigger danger.

“I grew up in the East Texas oil field, a place where the oil industry touches everything. I know how much power oil executives have over our democracy,” protester Mike Herbert said in the Greenpeace release. “That’s why I’m taking action to shut down the Houston Ship Channel, the largest fossil fuel thoroughfare in the country. The oil industry has spent millions of dollars to convince the American people—including the community I grew up in—that we can’t thrive without them. This just isn’t true. We are here because we believe a world beyond oil is possible, we just have to fight for it.”

Greenpeace USA climber Irene Kim told the Chronicle she had joined the protest “because we are in the middle of a climate emergency”, adding that “I want to show people that we have power to pressure our politicians and change our system. We know there’s a better world out there, but we have to demand it. It’s a privilege to be able to do this action.”