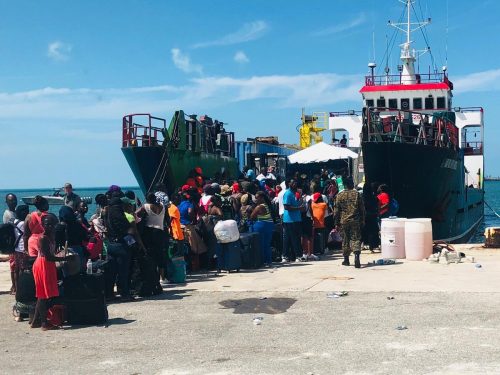 The treatment of 119 Bahamian hurricane survivors denied entry to the United States is being described as an early example of the “climate apartheid” many more parts of the world will face as the impacts of climate change accelerate.

The story began circulating several days ago, with Miami-based investigative reporter Brian Entin tweeting text and video updates from the scene. “Big problems on the ferry from Freeport to Florida—announcement just made that any Bahamian without a visa must now get off,” he wrote last Sunday. “This is not normal. Normally Bahamians can travel to USA with passport and a printout of their police record. This is a mess.”

Entin stressed the evacuees on the boat had no intention of staying in the United States. “They were coming to go grocery shopping, stay in a hotel with AC [air conditioning], chill for a little, and then head back,” he told The Guardian.

“It breaks my heart,” a spokesperson for U.S. Customs and Border Protection (CBP) told Newsweek Monday. “It’s like when you raise somebody’s hopes and then you pop the balloon…That, in my opinion, is what Baleària did.”

The official was referring to Baleària Eurolíneas Marítimas S.A., a Spanish company that runs ferry services in the Caribbean and the Mediterranean. But “nobody is entirely sure where the last-minute visa order came from,” The Guardian writes. The CBP office in Florida “initially pointed the blame at Baleària,” while the company “has said it was advised of the documentation requirements by the CBP. Meanwhile, [Donald] Trump’s acting CBP head, Mark Morgan, blamed the ferry fiasco on confusion.”

But Guardian reporter Arwa Mahdawi points to another, far more malign influence that may also have been in play.

“Addressing reporters on the White House lawn before heading to a campaign rally, Trump said he was keeping a close eye on the situation in the Bahamas. Particularly since the people fleeing the grim aftermath of Hurricane Dorian and trying to come to America might be dangerous drug dealers. Presumably because they are black,” Mahdawi writes.

It’s “perfectly possible that nothing more insidious than administrative confusion led to those 119 Bahamians being kicked off a ferry,” Mahdawi says. “No matter who is at fault, however, this episode should leave us all very unsettled.”