Large Methane Digesters Would Save 8.4 Gigatons of Carbon Equivalent by 2050 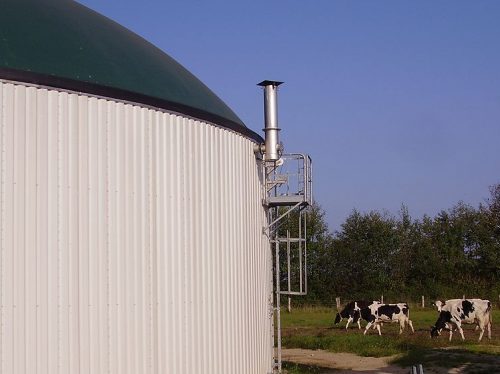 Large methane digesters rank #30 on Drawdown’s list of climate solutions, with potential to reduce greenhouse gas emissions by 8.4 gigatons by 2050. They operate at less cost than the conventional coal and natural gas power plants they replace, and would produce an estimated US$148.83 billion in savings over 30 years.

A methane digester is a sealed tank where industrial, agricultural, and human waste undergo a controlled fermentation process that produces energy. Inside the digesters, microbes turn organic waste material into two valuable commodities:  biogas, and nutrient-dense fertilizer. The gas can generate electricity to run the waste facility, farm, or landfill that produced the waste, and any leftover power can be sold back to the local or central electricity grid.

“When cleaned of contaminants, [biogas] can be used in vehicles that would otherwise rely on natural gas,” Drawdown adds. “On the solids side, digestate supplants fossil fuel-based fertilizers while improving soil health. The digestion process unfolds continuously, so long as feedstock supplies are sustained and the microorganisms remain happy.”

In China, the European Union, and Southeast Asia, large methane digesters have already been in use for two decades. Germany is way out in front: It operates close to 8,000 digesters totalling 4,000 megawatts of installed capacity, Drawdown reports. In the United States, use of methane digesters is steadily climbing, and if global adoption reaches 69.8 gigawatts of installed capacity, Drawdown says the technique will eliminate 8.4 gigatons of CO2 by 2050.

Biodigesters carry a number of side benefits, as well: They enable industries and governments to capture methane, a shorter-lived but much more potent greenhouse gas than carbon dioxide. The digestate fertilizer can help restore depleted nutrients in soils. Large methane digesters can also become an income stream for some operators, while helping municipalities solve the increasingly challenging problem of waste management.

While other waste management solutions such as waste-to-energy, recycling, composting, and landfill methane capture may tap into the supply of organic refuse, Drawdown says sewage sludge and agricultural waste are available in large enough quantities that biodigesters will still have a significant GHG reduction impact.