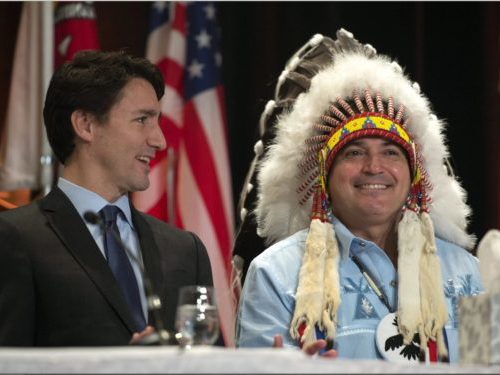 Just two days ahead of the official launch of Canada’s federal election, expected later this morning, the Assembly of First Nations released a policy paper identifying climate change as the top priority for the next federal government.

“Climate change’s ascension to the top election concern for First Nations comes after it wasn’t mentioned once in Closing the Gap, AFN’s election priorities document from the last election,” iPolitics reports. “Its 2015 agenda largely focused on advocating for initiatives to improve First Nations’ quality of life, which Honouring Promises, its 2019 edition, builds on.”

Has the gap closed yet?” asked National Chief Perry Bellegarde, referring to the title of the Assembly’s 2015 election document. “The answer is no. Has there been movement? The answer is yes, but we have to maintain momentum.”

Treating climate change as a “national priority” was one of a series of environmental commitments the AFN will be looking for in the first year of the next government, iPolitics says.

“Climate change, climate destruction is the number one issue facing all of us,” Bellegarde said. “Look at the flooding in First Nations along the Great Lakes, [and] right here in Ottawa. Look at the fires in Brazil…Look at the hurricanes. Look at what happened on the East Coast with Hurricane Dorian. Things are changing, no question, throughout the world.”

The AFN is calling on the next federal government to “better consult First Nations in the development of environmental regulations, mitigation strategies, and climate plans, including how to spend revenues generated by the carbon tax,” iPolitics states. It’s also urging government backing for environmental and regulatory reviews led by First Nations, and continuing support for newly-established Indigenous Protected and Conserved Areas.