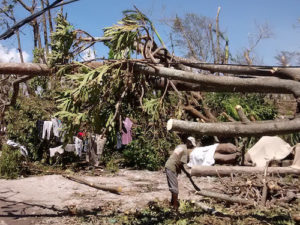 Countries must invest US$1.8 trillion in climate adaptation funding by 2030 to prevent a world of “climate apartheid”, in which the wealthiest pay to protect themselves from sea level rise and mounting food shortages while everyone else suffers.

“Every tenth of a degree rise in temperature matters as impacts scale quickly, even exponentially,” wrote the 34 members of the Global Commission on Adaptation. “At higher temperature increases such as 3.0 to 4.0°C, it becomes almost certain that we will cross tipping points, or irreversible changes in ecosystems or climate patterns, which will limit our ability to adapt.”

“Governments and businesses need to radically rethink how they make decisions,” Ban told media Monday. “We need a revolution in understanding, planning, and financing that makes climate risk visible.”

“For years we have seen adaptation, frankly, as the Cinderella of climate change, way behind mitigation,” said commission member and former UN climate secretary Christiana Figueres. “The message of this report is either we delay and pay, or we plan and prosper.”

“The commission’s proposals address many categories of climate risk, and how different geographic regions will be individually affected,” Bloomberg reports. “It calls for relatively low-budget improvements, such as early-warning systems for storms, to larger-scale construction projects.”

For example, something as simple as distributing reliable storm information one day ahead “can cut resulting damage by 30%,” the news agency notes, so that “an investment of $800 million might avoid up to $16 billion in annual costs.”

The commission “gives the example of Bangladesh, which has built early warning systems and shelters, strengthened buildings, and built civic awareness to protect the low-lying nation from cyclones,” InsideClimate News writes. “The result has been a dramatic reduction in deaths and losses: While the country saw 300,000 people die in a cyclone in 1970, and 138,000 in 1991, a 2007 storm that came after much of this work resulted in far fewer deaths, at about 3,360. One this year resulted in five deaths.”

Elsewhere, countries like Zimbabwe have stepped up efforts to get drought-resistant seeds to small farms, while resilient infrastructure investment in urban centres like London, UK “has led to enormous economic growth,” Bloomberg states: Without the Thames Barrier, whose primary purpose is to protect 1.3 million people from flooding, “flood risk would have prevented investments that allowed Canary Wharf to flourish”.

The report calls for a 15-month “year of action” leading into the crucial United Nations climate conference, COP 26, toward the end of 2020. The Global Commission “plans to set up pilot adaptation projects to demonstrate how ‘de-risking’ infrastructure plans will both help avert losses and contribute to revenue generation,” Bloomberg says, citing commission member Shemara Wikramanayake, managing director and CEO Macquarie Group, a financial services giant based in Australia.

“Investment is required in adaptation, given that climate change is on us,” Wikramanayake said. “What we’re keen to do is now use that awareness-building to move on to the next step, which is developing solutions to address the challenges.”

Citing the report, InsideClimate lists some of the reasons those investments haven’t already taken place.

“There’s a lack of understanding of the risks—many cities in developing nations do not have the type of floodplain maps that in the U.S. are issued by the Federal Emergency Management Agency,” the publication states. And in many instances, “climate risks need to be assessed as an economic value before government ministers or investors will take action,” and “short-term thinking often undervalues future savings.”

Another “major challenge is that the people who make policy or financial investments are often among the most protected, secure people, so they may overlook the risks that more vulnerable people face,” InsideClimate adds. “One focus in the coming year will be trying to increase the amount of international financing that reaches the local level, and to try to help local people gain a better voice in how that money is directed.”

Lois DeBacker, who helps fund resilience efforts in U.S. cities through the Kresge Foundation, said it was encouraging to see such a high-level organization raise the profile of climate adaptation, and of obstacles to action that are already well known. And Ban stressed that it isn’t too late for a global action plan to protect people from natural calamities like Hurricane Dorian.

“I’m here today to tell you that this is simply not true,” he said.

In Canada the best chance of getting where we need to go begins with this October’s election of a Minority Gov’t with the Greens holding the Balance if Powwer.

It is great that Bill Gates is onside.

However, why are not all the wealthy giving and support this movement? After all, the wealthy are the ones who have profited from producing CO2 emissions which have caused the Global Warming which now threatens to be far more insidious — Global Burning — causing complete collapse of the narrow bandwidth of the environment which support life as we know it and need it.

Perhaps you should ask Bill Gates and Warren Buffet to address the issue of the wealthy supporting mitigation of the environmental damage that getting wealthy has caused.