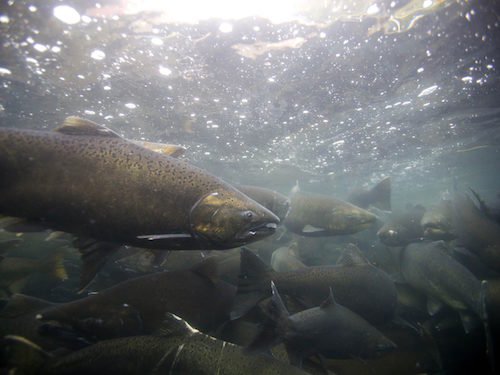 Whales, salmon, and sea lions are at risk as an ocean heat wave takes shape off the west coast of North America, the U.S. National Oceanic and Atmospheric Administration (NOAA) warned in a recent blog post.

The growing belt of warm water from Alaska to California “ranks as the second largest marine heat wave in terms of area in the northern Pacific Ocean in the last 40 years, after ‘the Blob,’ ” NOAA wrote, referring to a 2014-15 phenomenon that caused major disruptions for marine life.

“It’s on a trajectory to be as strong as the prior event,” scientist Andrew Leising of NOAA Fisheries’ Southwest Fisheries Science Center in La Jolla, California told The Hill. “Already, on its own, it is one of the most significant events that we’ve seen.”

NOAA recalls that “the Blob” led to “multiple” fishery disasters and a massive coastal algal bloom that ended crabbing and clamming efforts along the coast for months, The Hill notes. “Salmon numbers also declined during that time. Whales including humpbacks were forced closer to shore, resulting in entanglements with fishing lines, while thousands of sea lions were reportedly stranded on shore.”

Scientists are still hoping the heat wave will dissipate if the specific weather condition behind it—a ridge of high pressure that warmed the upper layers of the ocean—winds down. “It looks bad, but it could also go away pretty quickly if the unusually persistent weather patterns that caused it change,” said NOAA’s Nate Mantua.

But for now, “there are definitely concerning implications for the ecosystem,” said meteorologist Nick Bond of the Joint Institute for the Study of the Atmosphere and Ocean in Seattle. “It’s all a matter of how long it lasts and how deep it goes.”