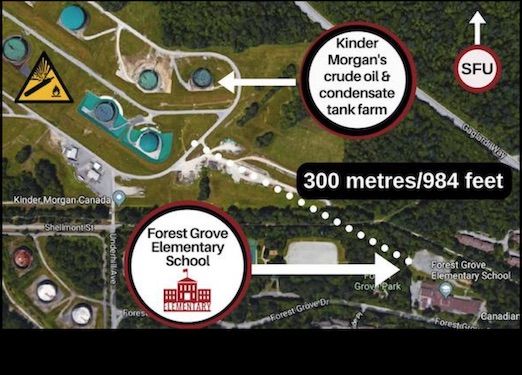 Trans Mountain Corporation won’t be able to respond fast enough if one of the bitumen storage tanks in its massive Burnaby Mountain tank farm boils over and spills, according to an audit completed in May by the National Energy Board, before it was replaced by the new Canada Energy Regulator.

“The company’s current plans are to mobilize staff and contractors from off-site to fight fires within six hours, but a boilover on Burnaby Mountain could happen in just over five,” City News 1130 reports. So the regulator ordered Trans Mountain to plan to respond two hours faster than it originally thought necessary.

“A boilover could happen if oil heats up and flows over the top of the tank, sending hot and molten crude oil out 10 times the diameter of the tank, covering the entire tank farm, the surrounding communities, Gaglardi Way and Burnaby Mountain Parkway,” the local radio outlet explains. “There’s also a possibility the other tanks could also catch fire, as would the surrounding forests, homes, and buildings.”

The assessment must come as no surprise to Gulf Islands-based folk singing legend Bob Bossin, whose 10-minute exposé in May 2018 focused on the acute dangers Burnaby and Simon Fraser University would face if the tank farm caught fire. “If the tanks are on fire, there’s no escape route,” he said at the time. “Almost certainly, the conservation forest would go up in flames, so it wouldn’t be a good time to be at Simon Fraser.”

He added that the tank farm is built into a mountainside in an earthquake zone, so Kinder Morgan has promised to build its new tanks to the highest earthquake-proof standard. But it isn’t upgrading the existing tanks, “which is like waterproofing one side of your tent”.

Beyond the gap in response time, the NEB/CER audit found Trans Mountain violating one of the cardinal rules attached to any emergency response plan: it only works if staff know what to do, and that’s only achieved by practicing, practicing, and practicing again. [That was the mantra at a health emergency preparedness workshop our team helped the federal government document more than a decade ago. We learned at the time that it applies to emergency plans of all kinds.—Ed.]

But Trans Mountain seems not to have received that particular memo. So the CER is “ordering the company to do random drills, because the current emergency plans don’t require them to do so,” City News 1130 states .”So far, the company has only completed drills where all staff were aware of them beforehand. The regulator says it will do its own surprise drill on response times within a year.”

In 2015, an assessment by the Burnaby Fire Department “found the ability to respond in time ‘questionable,’ and condemned the risks of expanding the number and size of tanks stored on Burnaby Mountain, saying it is too risky to the neighbouring area,” the news story adds.

“Trans Mountain’s facilities are designed and operated to industry best practices and meet the most stringent safety standards,” the company said in response to the audit. “In terms of the directive to reduce the target to assemble people and resources from six to four hours, to be clear, those are our planning standards, not response times. At our terminals, we are ready to respond immediately with people and equipment. The planning standards represent the time it could take for us to get fully mobilized in a worst-case scenario, and would include getting outside contractors and equipment onsite. We will be complying with the regulator’s directions on this.”

May: Canadian Greens Would Not Back Any Other Party Based on Current Climate Plans