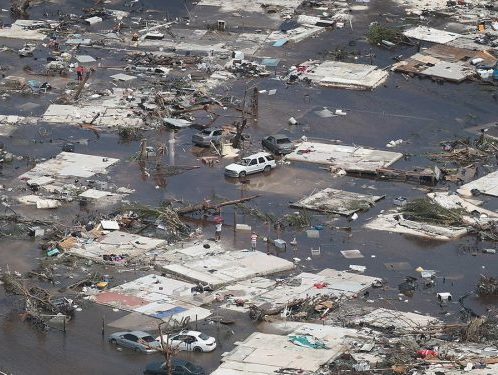 Recovery efforts are under way in Atlantic Canada after a weakened but still-punishing Hurricane Dorian swept through the region as a Category 2 storm that toppled trees and a giant construction crane, brought down power lines, sent at least one roof airborne, and left about 80% of Nova Scotia without power.

But with news reports from the Atlantic tracing a quick, relatively straightforward response to the storm, it was clear that eastern Canada had dodged the utter devastation still facing the Bahamas, the serious damage in the Outer Banks of North Carolina—and anything like the political storm that erupted after Donald Trump used a now-infamous black sharpie to alter an official map and falsely claim that Dorian was headed toward Alabama.

In the Bahamas, where devastated transportation and communication networks have made it hard for first responders to reach disaster sites, deceptively low death tolls are now giving way to estimates that hundreds or even thousands out of a total population of 400,000 may have perished. “The public needs to prepare for unimaginable information about the death toll and the human suffering,” said Health Minister Dr. Duane Sands. “Make no bones about it, the numbers will be far higher than 23,” the initial number attached to the confirmed death count.

“Literally hundreds, up to thousands, of people are still missing,” Joy Jibrilu, director general of the country’s tourism and aviation ministry, told CNN.

At Princess Margaret Hospital in Nassau, Medical Chief of Staff Dr. Caroline Burnett-Garraway “said two refrigerated, 40-foot trucks would be needed to hold the ‘staggering’ number of bodies likely to be found,” Thomson Reuters reports. “The United Nations estimated 70,000 people were in ‘immediate need of life-saving assistance’ such as food, water, and shelter. The UN World Food Programme was airlifting storage units, generators, prefab offices, and satellite equipment as well as eight tonnes of ready-to-eat meals.”

In the hardest-hit parts of the island archipelago, the devastation was total. “No schools. No banks. No gas stations. No supermarkets. No restaurants. No churches. No pharmacies. No hardware stores. No water, no electricity, and no phone lines,” the New York Times reports. “Hurricane Dorian didn’t just upend life in Marsh Harbour, the biggest town in the Abaco Islands. Dorian crushed it, stripping all essentials, schedules, and routines—everything residents and visitors had taken for granted. And there’s no sense when those things might be restored.”

One preliminary estimate put Dorian’s total cost to the Bahamas at US$7 billion. Against that massive financial hit, the country stands to receive a quick infusion of $11 million from a cooperative disaster insurance program that Caribbean countries have had in place since 2007, Bloomberg reports.

While states along the entire southeastern coast of the United States prepared for Dorian, it finally made landfall Friday morning on North Carolina’s Outer Banks, bringing seven-foot floodwaters and temporarily stranding residents of Ocracoke Island, the New York Times reports. What shocked Pastor Susie Fitch-Slater of Ocracoke United Methodist Church was how quickly the water stormed in.

“I am from the Outer Banks,” she said. “I was born here. And I have never seen anything like this before. I went into the attic, and I have never done that in my life. There was that moment when you wondered if it was ever going to stop. It’s the most frightened I’ve been, ever.”

For the third time in four years, a major storm also had residents bracing for a flood of hog poop in the state that is an epicentre of U.S. pig and poultry farming, Mother Jones reports.

Meanwhile, the agency Americans count on for accurate weather forecasts is facing a storm of its own, after Donald Trump visibly altered a weather map to support his own inaccurate claims about Dorian’s likely path. Trump was contradicted by a front-line weather forecaster with the National Oceanic and Atmospheric Administration (NOAA), NOAA senior management backed Trump over their own professional staff—and the news hit Saturday that an internal agency memo had previously warned staff against saying anything that would contradict the falsehoods and fulminations emanating from the Oval Office.

“In an agency-wide directive sent September 1 to National Weather Service personnel, hours after Trump asserted, with no evidence, that Alabama ‘would most likely be hit (much) harder than anticipated,’ staff was told to ‘only stick with official National Hurricane Center forecasts if questions arise from some national level social media posts which hit the news this afternoon,’” the Washington Post reports.

“A NOAA meteorologist who spoke on the condition of anonymity for fear of retribution said the note, understood internally to be referring to Trump, came after the National Weather Service office in Birmingham contradicted Trump by tweeting Alabama would ‘NOT see any impacts from the hurricane’.”

The Birmingham office “sent the tweet after receiving a flurry of phone calls from concerned residents following Trump’s message,” the Post adds. “The agency sent a similar message warning scientists and meteorologists not to speak out on September 4, after Trump showed a hurricane map from August 29 modified with a hand-drawn, half-circle in black Sharpie around Alabama.”

“This is the first time I’ve felt pressure from above to not say what truly is the forecast,” the meteorologist told the Post. “It’s hard for me to wrap my head around. One of the things we train on is to dispel inaccurate rumours, and ultimately, that is what was occurring. Ultimately, what the Alabama office did is provide a forecast with their tweet. That is what they get paid to do.”

A Weather Service spokesperson explained that “NWS leadership sent this guidance to field staff so they (and the entire agency) could maintain operational focus on Dorian and other severe weather hazards without distraction.”

That position provoked an “uproar” in the weather community, the Post states, with forecasters inside and outside the two agencies and former NOAA and NWS leadership speaking out against the agencies’ actions.

“AMS believes the criticism of the Birmingham forecast office is unwarranted; rather they should have been commended for their quick action based on science in clearly communicating the lack of threat to the citizens of Alabama,” the American Meteorological Society said in a release.

“The anonymous and disingenuous statement NOAA tweeted out is a major breach of scientific integrity that damages the NWS and stains the agency’s leadership,” said former NASA astronaut Kathryn Sullivan, who led NOAA under President Barack Obama.

“This looks like classic politically motivated obfuscation to justify inaccurate statements made by the boss,” agreed Jane Lubchenko, who preceded Sullivan as NOAA administrator. “It is truly sad to see political appointees undermining the superb, life-saving work of NOAA’s talented and dedicated career servants.”