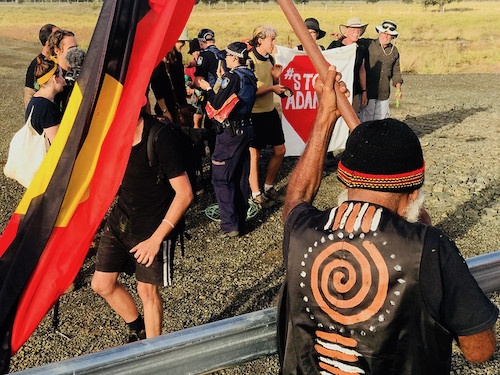 The state government in Queensland, Australia has gone to the extraordinary length of extinguishing Aboriginal title over 1,385 hectares of land to permit construction of the mammoth Adani coal mine, even as financial analysis concludes the project would be “unbankable and unviable” without billions of dollars in subsidies.

The extinguishment occurred “without any public announcement of the decision”, after Wangan and Jagalingou protesters said they had never given consent for Adani to occupy their territory, The Guardian reports.

“In a meeting with government officials Friday, seeking a halt on leases being issued for mine infrastructure, they learned the state government had instead granted Adani exclusive possession freehold title over large swathes of their lands on Thursday,” the news article states.

“We have been made trespassers on our own country,” said W&J Council leader Adrian Burragubba. “Our ceremonial grounds, in place for a time of mourning for our lands as Adani begins its destructive processes, are now controlled by billionaire miner Adani.”

And “with insider knowledge that the deal was already done, Adani had engaged Queensland police and threatened us with trespass,” he added.

“To mine any land under a native title claim, a miner needs an Indigenous land use agreement (ILUA), essentially a contract that allows the state to extinguish native title,” The Guardian explains. “Adani has an ILUA over the land: five of the 12 native claimants have opposed it, but have lost successive legal challenges in court to prevent it. Seven, a majority, of the native title claimants support the Adani mine.”

Adani has already bankrupted Burragubba with the cost of the legal challenges. But the project opponents vowed to continue their fight.

“We will never consent to these decisions and will maintain our defence of country,” he said. “We will be on our homelands to care for our lands and waters, hold ceremonies, and uphold the ancient, abiding law of the land.”

Meanwhile, new analysis by the Institute for Energy Economics and Financial Analysis shows the country pouring A$4.4 billion in capital and operating subsidies into Adani’s Carmichael coal mine, not including a 30-year, open-ended corporate tax shield that IEEFA classifies as “unquantifiable”. The list includes a seven-year, $900-million royalty subsidy on which India’s billionaire Adani Group and the Queensland Treasury are expected to sign off in the next month.

“When Adani announced they had been unable to attract international capital and so had to self-finance the Carmichael coal mine and rail proposal in late 2018, Chief Executive Officer Lucas Dow said they did not ‘require a cent of Australian taxpayer dollars’,” IEEFA recalls.

But “actions speak louder than words,” said Director of Energy Finance Studies Tim Buckley. “The federal and Queensland governments have repeatedly stated the Adani mine is commercially viable and able to stand on its own two feet—while at the same time providing Adani with billions of taxpayer dollar in subsidies.” The project “is entirely contrary to Australia’s international commitments under the Paris Agreement,” he added. “Our government’s massive subsidies should instead be funnelled into projects that help prepare and transition Australia’s regional communities, and those which are likely to generate corporate taxes for Australia,” especially knowing that the Adani mine “would not open nor survive without billions of dollars in ongoing subsidies”.