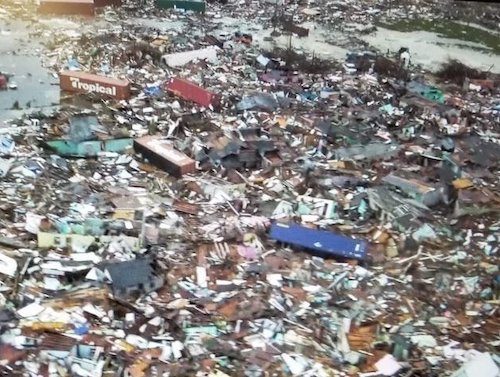 After stalling for 36 hours over parts of the Bahamas and leaving mind-boggling destruction and devastation in its wake, Hurricane Dorian is on the move as a Category 2 storm and began hitting Florida’s east coast with 110-mile/177-kilometre-per-hour winds Tuesday evening, according to the U.S. National Hurricane Center.

“The Bahamas is presently at war and being attacked by Hurricane Dorian,” Prime Minister Hubert Minnis told media. “And yet, it has no weapon at its disposal to defend itself during such an assault by this enemy.”

“Since records began in 1851, #Dorian is the slowest moving major hurricane (something that scientists have linked to a warming climate),” tweeted 350.org founder Bill McKibben. “This is what happens when a storm just sits like a blender over the Bahamas.”

Dorian originally hit the Bahamas as a Category 5 hurricane, the most intense on the five-point Saffir-Simpson hurricane wind scale, packing winds of 165 miles/265 kilometres per hour. By Monday, it had slowed marginally to a Category 4 and stalled over the island archipelago, crawling east at a pace of one to six miles per hour.

The hurricane’s “slow and deadly strike leveled homes, tore off roofs, submerged airports, destroyed cars, and transformed narrow island passes into open sea,” the Washington Post reports. “In sharp contrast with fast-moving storms that pass within an hour or two, some parts of the Bahamas, including the Abaco Islands and Grand Bahama Island, were witnessing more than 36 hours of brutal conditions. As the storm virtually stalled, the strike on northern Bahamas was dragging into Tuesday. Few places on the planet have experienced storm conditions as horrifically lengthy.”

As the three-day storm began to clear, “emergency workers were struggling to reach victims as search and rescue operations continued into Wednesday and the scope of the damage and humanitarian crisis unfolded,” CBC writes. “Some storm victims remained stuck on rooftops, waiting for rescue.”

“Victims are being loaded on flatbed trucks across Abaco,” tweeted local observer @mvp242, describing a rain-blurred photograph of limp bodies strewn across a truck bed. “Other Twitter messages said whole communities were swept away,” CBC says.

Bahamas Police Chief Samuel Butler “urged people to remain calm and share their GPS coordinates, but he said rescue crews had to wait until weather conditions improved,” the news report adds. “We simply cannot get to you,” he told local radio, responding to reports of people stuck on roofs and in attics.

That left communities to fend for themselves, with neighbours banding together to save neighbours in a series of “dangerous and harrowing” rescue efforts, CNN reports.

“On Grand Bahama Island, residents of Freeport fervently worked to rescue people in communities where the havoc wreaked by Dorian was much worse than expected,” the U.S. network states. “With streets almost impassible due to high water and stranded vehicles, and with pounding rain still falling and tropical storm force winds blowing, residents put together an ad hoc rescue group with boats and personal watercraft.”

Multiple news reports captured the shocked horror of local residents who were veterans of past hurricanes, but said they’d never imagined anything approaching Dorian’s fury. “I don’t think we’ve seen anything like this in our lifetime. Total destruction,” said Freeport resident Harold Williams.

CNN has the stories of one local woman who slipped under the water and drowned after succumbing to hypothermia, a man who found his brother clinging to a tree, and that victim’s wife “last seen grasping a piece of cardboard”.

With the country only beginning to assess the physical damage, “Marsh Harbour has suffered, I would estimate, in excess of 60% damage to their homes,” Minnis said, referring to the port on Great Abaco. “The Mudd, as we know, has been completely destroyed or decimated,” he added, referring to the Mudd and Pigeon Pea shantytowns.

Officials with various international agencies estimated that up to 13,000 homes, about 45% of the total on Grand Bahama and Great Abaco islands, were destroyed. More than 60,000 people will need food, and about 62,000 will need drinking water.

“It’s difficult to tell whether one scene shows a neighbourhood or an industrial centre,” CNN says, describing aerial video of the devastation. “The ruin was immense; the area had been turned into what looked from above like a floating landfill. Shipping containers were tossed among the rubble.”

“You can’t tell that there are any homes there. It looks like a bunch of building materials were put in a big grinder and thrown on the ground,” said helicopter videographer Brandon Clement. “Even new homes constructed under more stringent building codes were destroyed by the storm,” CNN adds, and “one older neighbourhood is gone.”

On Great Abaco Island, aerial video “revealed kilometres of flooded neighbourhoods, pulverized buildings, upturned boats, and shipping containers scattered like toys. Many buildings had walls or roofs partly ripped off after being battered by the storm for three days, CBC adds. “With telephones down on Abaco and Grand Bahama islands, residents posted lists of missing loved ones across social media. A single Facebook post by media outlet Our News Bahamas seeking the names of missing people had 1,600 comments listing lost family members since it went live on Tuesday morning.”

Now, Dorian is lashing the east coast of Florida before tracking north alongside the U.S. states of Georgia and North Carolina, bringing life-threatening storm surges and dangerous winds to all three states. “The flash flood threat will increase overnight along the Florida east coast, then spread up the southeast and mid-Atlantic coast beginning Wednesday,” the National Hurricane Center stated Tuesday. Two million people have received evacuation warnings. The U.S. National Oceanic and Atmospheric Administration says the 2019 hurricane season is beginning to heat up, Global News reports, with Tropical Storm Fernand slowly strengthening in the Gulf of Mexico, Category 3 Hurricane Juliette hitting wind speeds near 200 kilometres per hour in the eastern Pacific off Mexico, and a tropical depression forming near the Cape Verde Islands in the mid-Atlantic.