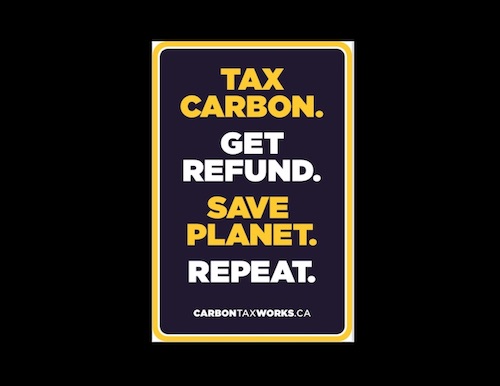 A new non-partisan volunteer group in Ontario is handing out free pro-carbon-tax stickers to counter the mandatory propaganda campaign mounted earlier this year by the province, just as the Ford government announced it would appeal a court ruling that the federal carbon tax is permitted under the Canadian Constitution.

Toronto-based CarbonTaxWorks unveiled its online portal for the stickers August 28, just days before the government messaging became mandatory for Ontario gas stations, and organizers are reporting brisk online orders across the province and beyond.

“The Ford government has given gas stations until Friday to put up anti-carbon-tax stickers that say ‘the federal carbon tax will cost you,’ or else they risk getting fined up to $10,000 per day,” National Observer reported last week. In response, CarbonTaxWorks organizers “say the information on the Ford government’s stickers is incomplete. They don’t mention that rebates will ensure most Ontarians get back more than they pay, or the growing global consensus that carbon taxes are the best way to combat climate change.”

“The gas pump stickers are misleading,” said Waterloo, Ontario volunteer Kevin Thomason. “We’re trying to guide things in the right direction.” Observer says the organization is doing that with a simple message: “Tax carbon. Get Refund. Save planet. Repeat.” The site also includes printable graphics with slogans like “We the North. Price Pollution” and “Keep calm and spend your carbon refund.” Another advises not to mess “with my kid’s future.” The graphics have been translated into Punjabi, French, Spanish, Chinese, Arabic and Tagalog.

“Having a survivable planet doesn’t need to be a partisan issue,” Thomason said. “If we’re going to take real, meaningful action on climate change, the consensus is that this is the best way to it.”

Energy Minister Greg Rickford’s office responded to the campaign with a statement maintaining the federal carbon tax isn’t constitutional—notwithstanding the powerful thumbs-up it received in early summer from the Ontario Court of Appeal.

“Since the carbon tax came into effect on April 1, 2019, we have seen the very real cost burden on the people of Ontario,” Rickford said. “Increased gasoline and natural gas prices mean that it is now more expensive to fuel our cars and heat our homes, with the carbon tax costing a typical Ontario household an extra $648 a year by 2022. Now, the federal government is suggesting it could cost Ontarians even more.”

That narrative “ignores the fact that the average Ontario household will also receive a rebate greater than the price paid for the carbon tax,” Observer notes. “The rebate would increase every year, reaching about $718 by 2022.”

But after laying the groundwork just two weeks to abandon legal action against the carbon tax, Ford did a U-turn last week, asking the Supreme Court of Canada to weigh in on the provincial appeal court ruling. Environment Minister Jeff Yurek said the province remains committed to “using every tool at our disposal” to fight the federal legislation, CBC reports, adding that “we have seen the very real costs on the people of Ontario”.

A spokesperson for federal Finance Minister Bill Morneau, who will be running for re-election in a downtown Toronto riding, took the opportunity to tie federal Conservative leader Andrew Scheer to a distinctly unpopular provincial premier.

“Ford has no plan for the environment beyond stickers on gas pumps and now a costly and unnecessary Supreme Court challenge,” wrote Pierre-Olivier Herbert. “Not content with the pain he has caused Ontarians through his deep cuts, now he is wasting their hard-earned money on a lawsuit to prevent meaningful action on the environment.”