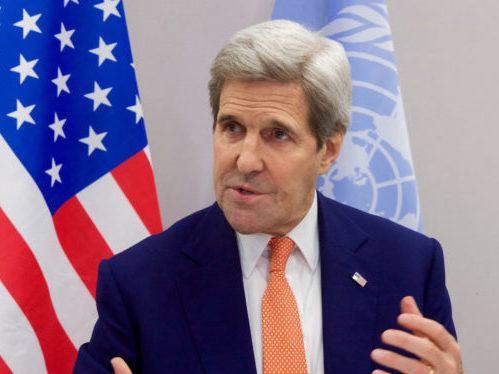 With parts of southern and eastern Australia suffering through a winter of intense heat and drought, and the Australian Medical Association declaring health emergency, former U.S. secretary of State John Kerry called for immediate action on the climate crisis and took what The Guardian called “veiled swipes” at governments that aren’t responding.

“We just can’t sit on our asses and leave the political process to Neanderthals who don’t want to believe in the future,” Kerry said, in a keynote address to the Global Table food and agriculture conference in Melbourne. “We have a dearth of leadership, but this will turn.”

Kerry weighed in on the failure of Australia’s climate-denying Liberal Coalition government to come up with a coherent climate strategy, and on plans for the massive Adani coal mine in Queensland, The Guardian states. The one-time U.S. presidential candidate was withering about the notion that countries must choose between climate action and securing jobs and economic growth.

“They are not separate. And anybody who persists in putting forward that notion that you have to make the choice—you can either have jobs plus prosperity or you can protect the environment and the future—that’s a lie,” he said. “We’ve got a whole bunch of people running around trying to save the status quo—when the status quo is actually feeding a lot of jobs that don’t make sense.”

He contrasted a growing solar work force of 300,000 people in the U.S. with a declining coal sector that currently employs 50,000, and took aim at Australia’s all-out effort to backstop the controversial and financially tenuous Adani project. “I got to tell you, we should not be moving to coal, we should not be encouraging coal, we should not be building infrastructure around coal,” Kerry said, receiving rousing applause in response.

When opponents argue that the cost of climate action is too high, he added, they rarely factor in the cost of climate disasters. In the U.S., Hurricanes Irma, María, and Harvey produced US$265 billion in clean-up costs, and “wait and see what happens with Dorian,” he said.

And he noted that rich countries have failed to keep their promise to fund effective climate response through the United Nations Green Climate Fund. “We said we would put $100 billion in that fund to help these smaller nations do this transition,” he told participants. “But do you know how much money is in that fund? Less than $5 billion. Come on, folks, that’s not serious.”

As Kerry spoke, data from Australia’s Bureau of Meteorology showed dire results for southern and eastern parts of the country that recorded their sixth-highest temperatures and lowest average rainfall on record during the winter months of June through August. “For the first eight months of 2019, maximums are running the hottest on record and mean temperatures the second-warmest,” the Sydney Morning Herald reports this week. New South Wales received about one-third of its usual winter rain and Sydney recorded its third-warmest winter, while Victoria state posted more moderate results.

“The Murray-Darling Basin, Australia’s food bowl, had yet another poor season, with less than half its typical rain,” the Herald states. “The average of 48.4 millimetres was its fourth lowest in more than a century of records.”

The AMA has recognized the health risks of climate change since 2004, The Guardian says. Now, “the peak organization representing doctors in Australia is calling on the Morrison government to promote an active transition from fossil fuels to renewable energy; adopt mitigation targets within an Australian carbon budget; promote the health benefits of addressing climate change; and develop a national strategy for health and climate change.”