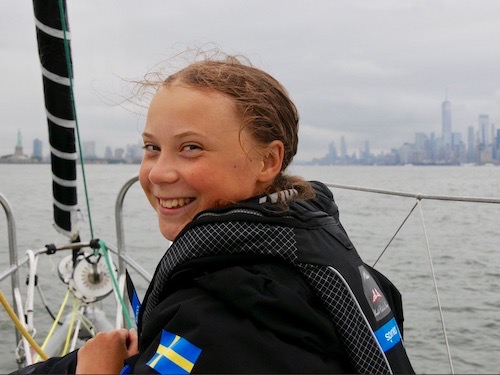 Bernier’s attacks echoed months of online abuse Thunberg has sustained from climate deniers and far right politicians in Europe, where her successful school strike movement took root before it spread around the world. Thunberg has proudly asserted her spot on the autism spectrum—her Twitter biography styles her as a “16 year old climate activist with Asperger´s”—adding that the condition helps her see the climate crisis more clearly.

“My brain works a bit different and so I see things in black and white,” she told The Guardian earlier this year. “Either we start a chain reaction with events beyond our control, or we don’t. Either we stop the emissions or we don’t. There are no grey areas when it comes to survival.”

The Asperger’s connection has been the tenuous hook for Thunberg’s opponents in Europe to try to undercut her mounting influence and momentum. Not long after she arrived in North America for this month’s climate summit in New York, Bernier got to work, with an initial tweet Sunday followed by an eight-part Twitter rant Monday, Global News reports. It wasn’t long before reasoned voices began tweeting right back.

“Maybe her #aspergers gives her a superior ability to focus,” wrote conservative columnist and communicator Tasha Kheiriddin. “Maybe she is an exceptional person because of it, not in spite of it. #Autism is not mental instability. Your comment is ignorant and shameful.”

“Attacking a child for how she is? That is perhaps the most loathsome, despicable, vile thing you can do. And @MaximeBernier did it,” wrote election war room veteran Warren Kinsella. “My God, I will celebrate his humiliation on election night. #cdnpoli.”

“What is @MaximeBernier so afraid of?” asked former Ontario environment minister Glen Murray. “He fails to challenge one scientific fact or idea that @GretaThunberg is advocating for and then attacks her character & mental health. She is advocating for the implementation of the UN IPCC scientists’ recommendations. Hardly radical.”

Bernier pretty much answered Murray’s opening question with the first of his eight tweets Monday: “@GretaThunberg has become the international mascot for climate alarmism,” he wrote. “The goal of the green Left is to radically transform our society through hysterical fear that the end of the world is coming and we have no choice but to give up our freedoms and way of life.”

Thunberg pushed back on the attacks in her own tweet August 31: “When haters go after your looks and differences, it means they have nowhere left to go. And then you know you’re winning! I have Aspergers and that means I’m sometimes a bit different from the norm. And—given the right circumstances—being different is a superpower. #aspiepower.”