New Approach to Geothermal Requires No Fracking or Water, Produces No GHG Emissions 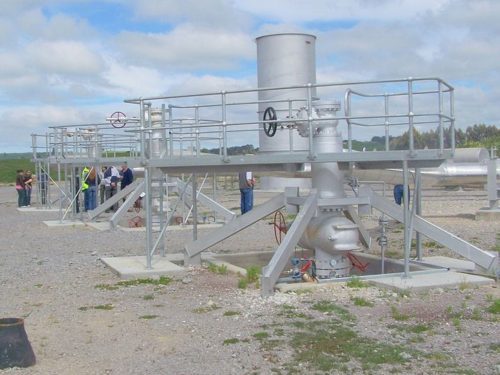 A first-of-its-kind approach to geothermal energy that uses no fracking or water and produces no greenhouse gas emissions is turning heads in central Alberta, where Calgary-based Eavor Technologies is building a C$10-million pilot plant.

In contrast to conventional geothermal installations, the system works more like a radiator, circulating a proprietary fluid through a loop that runs 2.5 kilometres below the Earth’s surface, CBC reports.

“It’s just a much more benign system, and it’s something that you can implement across 80% of the world instead of 5% of the world like traditional geothermal,” said company president and CEO John Redfern. “You can put it almost anywhere. It’s not like a windmill or solar panel…almost everything’s underground, so you can literally put it in someone’s backyard.”

Geothermal has long been seen as a promising renewable energy option that relies on the high-temperature heat that collects in underground rock. The new technology, the Eavor-Loop, “is using a lot of traditional building blocks but rearranging them in unusual fashion,” Redfern said.

That’s the “radiator effect” that gives Eavor its closed loop, he added.

The company hopes to close the loop by the end of this month and conclude the pilot project by the end of the year. After that, Redfern plans to focus on about a dozen commercial projects across Canada and around the world.

Alberta Innovates and Emissions Reduction Alberta recently threw $1 million into the project, with Infrastructure Minister Prasad Panda declaring it a “game-changer” after a recent site visit.

The Canadian Geothermal Energy Association is cheering Eavor Technologies on while it presses Alberta to develop a regulatory framework for geothermal development, similar to regimes that are already in place in Saskatchewan and British Columbia.

“It’s very exciting and we’re really hoping for the best from this demonstration project,” said Policy Manager Christal Loewen. “Canada is not Hawaii or Iceland. But we do have the quality of geothermal energy resources that can actually be used to generate electricity.”