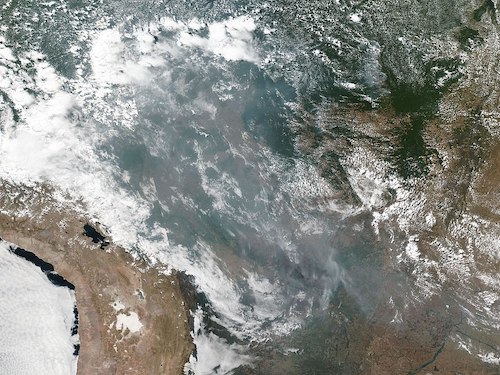 G7 leaders meeting in France are close to an agreement to help Brazil curtail devastating wildfires in the Amazon rainforests, with a coveted trade deal between the European Union and key South American countries hanging in the balance and at least one politician urging the continent to ban Brazilian beef imports over the role of “Capitão Motoserra” (Captain Chainsaw), also known as Brazil President Jair Bolsonaro, in enabling and encouraging the fires.

After describing the record conflagration as an “international crisis” last week, French President Emmanuel Macron said yesterday that G7 leaders are “all agreed on helping those countries which have been hit by the fires as fast as possible.” He added that “our teams are making contact with all the Amazon countries so we can finalize some very concrete commitments involving technical resources and funding.”

“In a very special way, we are galvanized by the terrible fires in the Amazon,” said German Chancellor Angela Merkel, vowing late last week that the situation would be a central issue at the summit. She added that a key goal would be “to send a clear message that everything must be done to stop the burning of the rainforest.”

“We did lots of work to protect the environment at the G7 last year in Charlevoix, and we need to continue this weekend,” tweeted Canadian Prime Minister Justin Trudeau, on the eve of the summit. “We need to act for the Amazon and act for our planet—our kids and grandkids are counting on us.”

UK Prime Minister Boris Johnson pledged £10 million, CBC says U.S. actor and environmentalist Leonardo DiCaprio promised US$5 million, and Bolsonaro tweeted Sunday that he had also received an offer of support from Israel. DiCaprio and two other philanthropists, Laurene Powell Jobs and Brian Sheth, also launched a new Amazon Forest Fund yesterday, promising that 100% of the funds they raise will help restore the forests widely known as the “lungs of the Earth”.

But as one measure of what those response efforts are up against, a member of the Baré Indigenous people in Brazil’s northwestern Amazonas state said Bolsonaro’s government “has unleashed an assault on Indigenous people and their lands by emboldening farmers, ranchers, and miners to carve deeper into the Amazon rainforest,” CBC reports. The result has been “a rise in the displacement of Indigenous people from these lands—one that she said often comes with violent death.”

United Nations Secretary General António Guterres said he was “deeply concerned” by the fires, adding “we cannot afford more damage to a major source of oxygen and biodiversity.”

A New York Times analysis had the EU seizing the mantle of global climate champion in light of the fires as Donald Trump missed the memo, tweeting “that the United States was ready to help contain the fires, but adding that ‘future trade prospects’ between the United States and Brazil ‘are very exciting’.” That contrast “highlighted the gap in leadership on issues affecting the global climate” between a climate-denying White House and European leaders.

“There is a European vision of the world, and this vision is asserting itself more and more—that the European Union has to be a green superpower,” said Member of European Parliament and Macron ally Pascal Canfin.

And Climate Action Network-International member organizations called on the G7 to do more about the crisis than express their outrage.

“Ever since they took office, Bolsonaro and his environment minister, Ricardo Salles, have dedicated themselves to destroying Brazil’s environmental governance and law enforcement agencies,” Observatório do Clima Executive Secretary Carlos Rittl said in the release. “At the same time, they have empowered environmental criminals with promises of opening up Indigenous people’s lands for business and keeping environmental inspectors from doing their job. The increased number of fires this year reflects Bolsonaro’s irresponsibility, and turns into smoke not only trees but also Brazil’s reputation and the health of its people.”

“It is unacceptable that the largest rainforest in the world, home to nature and many native communities, is on fire for days on end with no clear response or political leadership from the nine countries that are blessed to have the Amazon in their territory,” said Alejandro Aleman, CAN’s Latin America network coordinator located at Centro Humboldt. “Bolsanaro has once again proven his true colours, but this is not a matter for a single country anymore. Civil society in Latin America is committed to supporting civil society in Brazil to face up to the challenge and demand that environmental integrity and human rights are protected.”

“This massive destruction of the Amazon comes as both domestic and international pressure is building against the Bolsonaro government for its complete disregard for the climatic and human rights impacts of this disaster,” said Shefali Sharma, European director of the Institute for Agriculture and Trade Policy. “If European governments are genuinely concerned about the devastation taking place, they must send a strong signal to Bolsonaro and urgently stop the EU-Mercosur trade deal.”

It took that level of withering international political pressure from that many directions to get him moving, but Bolsonaro finally authorized his own country’s military to step up and fight the crisis, with warplanes dropping water on the fires in seven states. Defence Minister Fernando Azevedo said six states—Roraima, Rondonia, Tocantins, Para, Acre, and Mato Grosso—had requested federal assistance.

“A video posted by the Defence Ministry on Saturday evening showed a military plane pumping thousands of litres of water out of two giant jets as it passed through clouds of smoke close to the forest canopy,” CBC writes. “But outside of Rondonia, the government had yet to give operational details for other states. The Defence Ministry said in a briefing on Saturday that 44,000 troops were available in Brazil’s northern Amazon region but did not say how many would be used where and what they would do.”

And federal prosecutors “said they were investigating a spike in deforestation and wildfires raging in the Amazon state of Pará to determine whether there has been reduced monitoring and enforcement of environmental protections,” the Globe and Mail reports. “Prosecutors said they would look into an ad they said was published in a local newspaper encouraging farmers to participate in a Fire Day, in which they would burn large areas of forest ‘to show Bolsonaro their willingness to work’.”

But as recently as last Thursday, the Brazilian president was telling the rest of the world not to interfere in the crisis, even as he “admitted farmers could be illegally setting the rainforest alight,” the Globe recalls. With no evidence to back him up, Captain Chainsaw had previously, ludicrously accused Brazilian environmental groups of setting the fires after seeing their state funding cut.

As for the emboldened farmers and ranchers like the ones alleged to have placed the Fire Day ad, “for god’s sake, there is not proof of that, nobody writes ‘I will set fire to that’. It does not exist,” Bolsonaro declared, in a video published by The Independent. “If you don’t catch someone red-handed while setting the fire, then look for those responsible for ordering it…it’s a crime.”

His more urgent concern was reserved for countries that actually wanted to do something about the crisis. “These countries that send money here, they don’t send it out of charity…They send it with the aim of interfering with our sovereignty,” he said in a Facebook Live broadcast, even as he admitted his country couldn’t bring the fires under control. “The Amazon is bigger than Europe, how will you fight criminal fires in such an area?” he asked. “We do not have the resources for that.”

Citing a document leak last week to the openDemocracy website, The Independent concludes Bolsonaro “hopes to sabotage conservation efforts in the Amazon”, with plans to ‘build bridges, a motorway, and a hydroelectric plant in the jungle to ‘fight off international pressure’ to protect the world’s largest rainforest”.

Though that chilling policy objective is not by any means unanimously shared in his country. On Twitter, lower house speaker Rodrigo Maia announced plans to create “an external committee” to monitor rainforest burning, “evaluate the situation and propose solutions to the government,” the Globe says. The Bishops Conference for Latin America expressed concern about the “tragedy” and called for immediate action to protect the rainforest and nearby communities. “We urge the governments of the Amazon countries, especially Brazil and Bolivia, the United Nations, and the international community to take serious measures to save the world’s lungs,” the group said Thursday.

And the latest polling in Brazil showed 90% of voters—including the majority of Bolsonaro supporters, politicians representing rural and agriculture constituencies, and evangelicals—wanted the country to intensify its efforts against Amazon deforestation, Avaaz reported.

Last week, Climate Action reported that “satellite data from Brazil’s National Institute for Space Research (INPE) shows an 85% increase in the rate of forest fires, with just half of these fires occurring in the Amazon.” The story added that “these fires are not just affecting Brazil; several South American countries, such as Venezuela, Bolivia, and Colombia, are also currently dealing with forest fires.” With an area the size of the U.S. state of Delaware burned in the space of a few days, Bolivian President Evo Morales suspended his re-election campaign yesterday and shifted his position to welcome international aid. “Whatever cooperation is welcome, whether it comes from international organizations, celebrities, or from the presidents who offered to help,” Morales said, adding that Bolivian officials would “dedicate ourselves” to the problem.