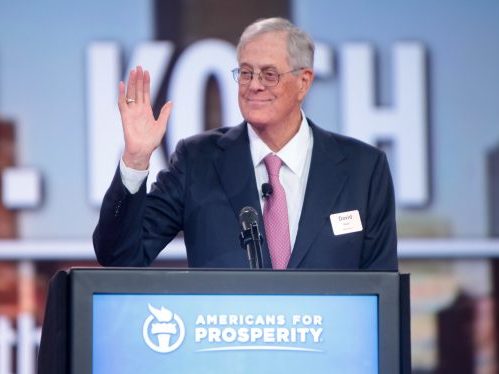 David Koch, the billionaire fossil magnate and activist libertarian who helped bankroll one of the world’s most potent climate change denial networks, died Friday at his home in Southampton, New York, at age 79.

Koch stepped down in 2018 from active roles in Wichita, Kansas-based Koch Industries, the company he and his brother Charles inherited from their father and built into a global conglomerate, and in the extreme right advocacy network they subsequently built.

“Koch Industries became the second-largest privately-held company in the United States, and by 2018, Charles and David Koch were estimated to be worth in the neighborhood of US$60 billion each,” the Washington Post reports. David Koch was said to be the wealthiest resident of the New York borough of Manhattan.

The Koch brothers “poured money into think tanks and other groups that promoted their agenda, including the denial of climate change science,” the Post recalls, prompting Greenpeace to brand Koch Industries the “kingpin of climate science denial” and rank the company above colossal fossil ExxonMobil in working to defeat climate legislation. They’ve also been tagged as a leading obstructer mass transit development in U.S. cities, and of electric vehicle development across the country.

“With their opposition to government regulation, especially when it came to the environment, the Koch brothers were often accused of promoting naked self-interest under the cloak of a high-minded commitment to free market ideology,” the Post adds. David Koch “made no apologies for his opposition to government regulation,” and apparently “bristled” at the pushback that resulted from Greenpeace and other environmental groups.

“They’re attacking us as environmental criminals,” he once complained, “wanting to put me and Charles in jail.”

The Kochs became an attack line for Democrats, as well. “It’s time the American people spoke out against this terrible dishonesty of these two brothers who are about as un-American as anyone I can imagine,” then Senate majority leader Harry Reid (D-NV) said in 2014.

Koch’s support for a range of cultural, medical, and non-profit organizations positioned him “among the most openhanded donors of his era,” the Post writes. “But it was through a network of well-financed advocacy groups that the Koch brothers achieved their greatest distinction, spreading an uncompromising anti-government gospel that moved the Republican Party steadily to the right.”

It was an attitude David and Charles inherited from their father, Fred, a founding member of the hard right John Birch Society. In 1980, David Koch ran for office as the vice-presidential nominee for the U.S. Libertarian Party, on a platform that called for the country to abolish all corporate and personal income taxes, Medicare, and child labour laws.

But that campaign was tame compared to the $900 million the Koch-funded Americans for Prosperity poured into the 2016 U.S. election campaign, an amount “not much less than the total laid out by the Republican Party,” the Post notes. Officials with particularly close ties to the Kochs include U.S. Vice President Mike Pence, Pence Chief of Staff Marc Short, Iowa Senator Joni Ernst, disgraced former Environmental Protection Agency administrator Scott Pruitt, and Secretary of State Mike Pompeo, who was apparently known as the “congressman from Koch” when he (so to speak) represented the Wichita electoral district where Koch Industries headquarters are located.

“The exact total the brothers gave to political causes is not known, because much of it was ‘dark money’ routed through non-profit groups that were not required to disclose the sources of their funding,” the Post says. “But estimates of those contributions range into the hundreds of millions of dollars.” Meanwhile, “on the state and local levels, Koch money was credited with helping Republicans install majorities in 31 state legislatures by 2018”.

And the Kochs’ influence went well beyond their chequebooks. “In 2003, they began holding semi-annual retreats at posh resorts, where wealthy conservatives flocked to discuss free market principles, meet political candidates, and pledge enormous sums to Koch-aligned entities. At the first gathering, barely more than a dozen guests showed up. By 2018, the gatherings were attracting more than 700 attendees.”

While the Post goes into detail on Koch’s life history, and his outsized, malign influence on U.S. politics, CBC reports on some of the grassroot reaction to that influence. “Wishing the Koch brothers a speedy reunion,” wrote actor Ron Perlman. “Great GAIN for the planet,” tweeted progressive activist Ryan Knight.

“Some of this was likely fuelled by the toxicity of U.S. politics right now,” CBC says, citing author Christopher Leonard, “but it’s also rooted in some substance, and the degree in which opponents of Koch and his brother Charles resent both their views and the significant impact these billionaires have had on U.S. political life.”

“It’s a combination of their wealth and their effectiveness,” Leonard said. “They really have had a massive effect on U.S. politics,” which has made them “a stand-in for everything wrong with American politics. For many people in America, they are billionaires who affect policy deeply.”

The Kochs declined to support the Trump presidential campaign in 2016, and have seen some of their influence in Washington wane as a result. However, several commenters on the Washington Post obituary held the Koch network responsible for the toxic politics that fuelled the populist backlash that helped Vladimir Putin elect Trump.