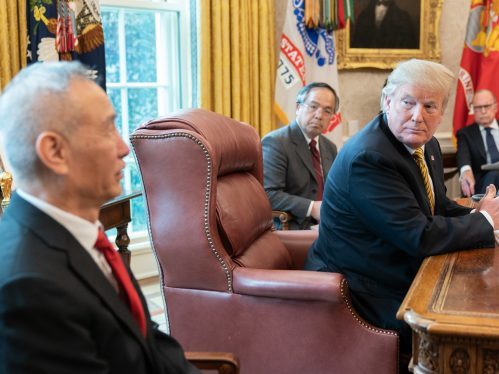 The increasingly bitter trade dispute between the Trump administration and China is shaping up as a new barrier to getting global greenhouse gas emissions under control.

Wood MacKenzie’s 2019 Energy Transition Outlook (ETO) shows some positive movement, Greentech Media reports, although it treats 3.0°C as its baseline for future atmospheric warming. In the electricity sector, “wind and solar will account for a quarter of the world’s power supply by 2040, up from 7% today, and the share will be closer to 50% in many affluent countries.” It echoes other recent reports that “utility-scale solar will be cheaper than gas-fired power just about everywhere by 2023,” while predicting that “sales of off-grid home solar energy systems will notch an 80% compound annual growth rate during the 2017-2022 period, bringing zero-carbon power to hundreds of millions more people in places like sub-Saharan Africa.” The global wind market will expand from 44 to 63 GW over the next decade, while “installed energy storage capacity will grow from four gigawatts currently to 600 gigawatts by 2040.”

But the good news pretty much ends there. WoodMac predicts that “with two billion people lacking reliable electricity access, and the population still growing, total energy demand will continue rising to at least 2040,” Greentech writes. While global emissions “look set to plateau” in the 2030s, they will not yet be falling.

And then there is the escalating trade war between the United States and China.

The tension between the two superpowers, which shows no signs of cooling, will serve global climate action very poorly, as both superpowers are now “deprioritizing decarbonization,” said Wood Mackenzie’s head of markets and transitions for the Americas, David Brown. And while China’s increasing reticence to accept U.S. liquefied natural gas (LNG) exports to meet demand in its power-hungry eastern provinces is “unlikely” to drive the country back to coal, it may well “slow down its coal-to-gas switching”.

Meanwhile, with an avowed protectionist and climate denier currently occupying the White House, the U.S. is proving no friend to the global energy transition, Greentech writes, with tariffs on most imported solar modules and new ones in the works for wind turbine towers that “could undermine project economics, just as the wind market enters what is expected to be a historic boom period.”

That kind of regressive protectionism “reverberates far beyond the energy industry,” the ETO notes. “Green steel,” for example, will remain a pipe dream.

Then there is the broader damper the U.S.-China quarrel will place on global economic growth, “which in turn makes it more difficult for political leaders to push aggressive decarbonization agendas,” Greentech writes. WoodMac says that concern would apply to sectors like aviation, shipping, construction, and agriculture industries, where decarbonization efforts are currently showing “little to no progress”.

Putting all these factors together, Wood Mackenzie sees fossil energy use declining only slightly, from 90% of global primary energy supply today to 85% in 2040, even with some fossil producers embracing low-carbon technologies.“The market is kind of forcing them together, in the sense that some investors are asking oil and gas companies about their low-carbon business strategies,” Brown said.  “But it’s a real challenge, because the core obligation for these companies is to their shareholders. They want robust and healthy returns, and those come from oil and gas right now.” [Though not every analyst agrees.]