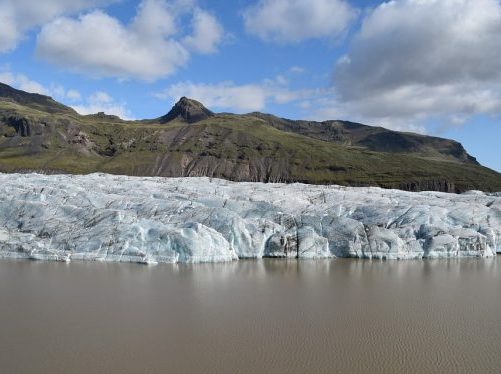 In a ceremony designed to provoke the deepest sense of grief, and to galvanize all who hear of it to action, Iceland recently commemorated the loss of its first glacier, once known as Okjokull, to global warming.

Political speeches, poetry, and anguished silence were at the centre of the ceremony held August 18, writes Deutsche Welle (DW). But what was left to stand the test of time was a memorial plaque bearing the words: “This monument is to acknowledge that we know what is happening and what needs to be done. Only you know if we did it”

The ceremony for a “fallen glacier” was very much intended to touch peoples’ hearts, organizers said, noting that the abstractions of climate change with its “many dire statistics and sophisticated scientific models” can “feel incomprehensible.”

“We see the consequences of the climate crisis,” Jakobsdottir said during the ceremony. “We have no time to lose.”

The commemoration project “was initiated by local researchers and their colleagues from Rice University in the U.S.,” DW states, citing an earlier comment by Cymene Howe, associate professor of anthropology at Rice: “This will be the first monument to a glacier lost to climate change anywhere in the world.”

With Iceland “losing approximately 11 billion tons of ice per year,” the German broadcaster reports, “scientists warn that about 400 glaciers in Iceland risk the same fate, fearing that they will all be gone by 2200.”

Okjokull’s own extinguishment has been shockingly swift, declining from 16 square kilometres in 1890 to just 0.7 in 2012. By 2014 it had been “officially stripped of its glacier status,” losing the core part of its name as a result: Okjokull, which means “Ok Glacier,” in Icelandic, became just “Ok,” writes DW.

Glacial ice is not the only thing in retreat in Iceland, thanks to rising global temperatures. The New York Times reports that “Iceland’s economy is on the cusp of a recession, partly because an important export, the capelin fish, vanished this year in search of colder waters.” Trouble for the nation’s fisheries is compounded by the fact that as its massive glaciers shrink, the land beneath is “rising from the sea” and endangering coastal ports whose business depends upon deep waters, fishing executive Adalsteinn Ingólfsson told the Times.

Elected prime minister in 2017, with her environmental credentials evident to all in her platform to fight climate change, Jakobsdóttir and her government are “budgeting US$55 million over five years for reforestation, land conservation, and carbon-free transport projects to slash greenhouse gas emissions,” the Times says. “More will be spent by 2040, when Iceland expects businesses, organizations, and individuals to be removing as much carbon dioxide from the atmosphere as they put in.”

But decarbonizing Iceland will remain enormously difficult, especially now that tourism has become “the engine of growth after a banking collapse in 2008.” Flourishing all the more as temperatures climb, Iceland’s status as a tourist mecca has increased the country’s climate woes, “as planes packing millions of visitors push per capita carbon dioxide emissions above that of every country in Europe.”

For Steinthór Arnarson, 36, who runs a lucrative business taking tourists on boat trips in the ever-expanding lagoon abutting the giant, and melting, Vatnajökull glacier, global warming is a psychological double-edged sword. “People are stunned by the glacier’s beauty and feel like me,” he told the Times. “It’s nice to see a piece of it break off.” And yet, “it’s really sad.”

Such feelings of sadness are going to grow far more common and deepen, says a recent op-ed in The Guardian. They’re already deeply felt in places like Greenland, where a survey confirmed that the majority of citizens accept the reality of anthropogenic climate change—and that that reality is making them unhappy, depressed, and fearful.

“Given that [Greenlanders] live in cultural and climatic conditions that put them at the front line of ecological change, we might be well advised to take their thoughts and feelings seriously,” writes psychoanalyst Anouchka Grose.  “Where they go, we may very well follow.”

Noting that people from New South Wales to the North Pole are creating entirely new words, or redeploying old ones, to give language to their “ecological grief,” Grose writes that “the north Baffin Inuit have the word uggianaqtuq to describe the unpleasant feeling caused by a friend behaving strangely, or even a sense of homesickness experienced when one is actually at home.”

“More recently,” she adds, “this word has been co-opted to describe volatile weather conditions and the sense of one’s surroundings becoming unreliable—storms brew more suddenly and last for longer, the ice is thinner, and food is noticeably more scarce.”