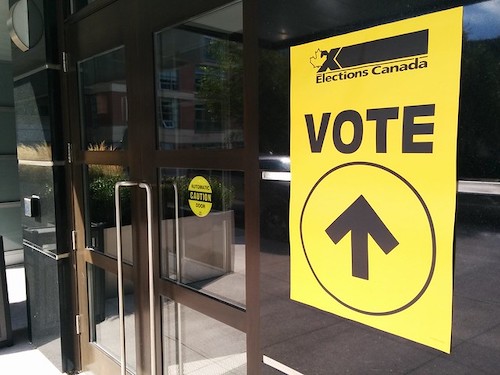 Elections Canada had to go out of its way this week to clarify that environmental groups can talk about climate change during the upcoming federal election, and that charities won’t be seen as engaging in partisan activity by doing so, after a weekend news report raised concerns about the restrictions the groups could face once the official campaign period begins in mid-September.

“The act does not prevent individuals or groups from talking about issues or publishing information,” Chief Electoral Officer Stéphane Perrault said in a statement late Tuesday.

That was after “a number of media outlets reported on an Elections Canada training session offered to various groups earlier this summer on how to stay on the right side of the law during the election,” CBC writes. At that time, “trainers from Elections Canada suggested that because Maxime Bernier, the leader of the People’s Party of Canada, has expressed doubts about the role of human activity in climate change, any group that promotes action to fight climate change in paid advertising would be seen by Elections Canada as engaging in partisan advertising.”

That interpretation of the Canada Elections Act threw what The Canadian Press called a “pre-election chill” over dozens of organizations across Canada, from well-established charities and non-profits, to small, ad hoc groups of climate crisis campaigners with no resources to seek legal interpretations or file paperwork.

In his late Tuesday update, Perrault said Elections Canada’s oversight would be limited to paid issue advertising, “which is not considered partisan but still requires the group or person paying for the advertising to register as a third party with Elections Canada,” CBC states. “The reports led some to think there had been a change in the law restricting freedom of speech for advocacy groups—such as environmental organizations, human rights groups, and pro-pipeline associations—during the writ period. As Perrault said Tuesday, that’s not the case; these rules have existed for 20 years.”

The upshot: “Environmental groups can advocate for Canadians to take action to fight climate change, or promote the science behind climate change, without restrictions—providing they do it through email or text messages, online, by canvassing door to door, or by giving media interviews,” CBC explains. If the organizations “spent C$500 or more advertising on an issue identified with a party during the election, they would be required to register with Elections Canada as third parties and would be subject to a spending limit of $511,700 during the election period.”

But Elections Canada would not set out to regulate the content of those groups’ messaging. “The act doesn’t speak to the substance of potential third party issue advertising, nor does it make a distinction between facts and opinion,” Perrault said in his statement. “It is not Elections Canada’s role to make that distinction, no matter how obvious it may appear.”

Perrault also laid to rest any fears that environmental charities would be seen as engaging in prohibited partisan activity if they talked about climate change or climate science during the election. That was a serious concern, after the Harper government initiated its notorious “charity chill” in 2012, using the Canada Revenue Agency to target its perceived adversaries with multiple, costly audits for alleged political activities that exceeded their permitted scope as charities.

On the West Coast Environmental Law blog, staff lawyer Andrew Gage published a detailed explainer last night that covers the do’s and don’ts of climate campaigning during an election period. “We’re pleased to report that Canadians can—and must—continue to speak out loud and clear about climate change at this critical time,” he writes. “Reports that they might be considered partisan for doing so have been greatly exaggerated.”

Based on an accurate reading of the Canada Elections Act, “it is clear that statements about climate science, the urgency of climate change, or what policies/laws will help deal with climate change would not be partisan (unless of course they were followed by something like: ‘…so you should vote for/not vote for X party or candidate’).”

Citing the Elections Canada handbook, Gage adds that “some community groups may be intimidated, during the election period, by having to register with Elections Canada, but the requirements need not be a huge barrier. Registered third-party advertisers need to submit a registration form and have a separate bank account, a fiscal agent, and (if it’s a corporation) a resolution from its board. In addition, if more than $10,000 is spent on advertising, an auditor must be appointed, and importantly, no international donations may be used for election advertising.”

All of which means that “anyone spending more than $500 on getting their word out during the election period—for example, through paid ads or boosted social media content—will need to be aware of these legal requirements. But most people and organizations won’t need to worry.”

Gage adds that “there is something galling to those of us have seen climate science restricted by government decree to see the suggestion that the reality of climate change is a ‘partisan issue’, simply because a party has decided there are political points to be gained by reaching out to climate deniers.” But even if Elections Canada makes no distinction between climate facts and opinions, “Canadians will consider those distinctions when they head to the polls.”

Which means that “Canadians—and their organizations—must keep insisting that climate change is not a partisan issue and that all parties must put forward plans that will protect Canadians and our atmosphere from global warming. It is absolutely essential that climate change, and how to address it, be a major issue in the coming election. We intend to be part of this debate in a non-partisan fashion, and so should you.”

Before Elections Canada clarified its position, politicians of all stripes condemned the apparent restriction on campaign communications.

“This is lunacy,” said Green party Leader Elizabeth May. “Elections Canada is not a lunatic organization, so I trust they will clarify and eliminate this ruling.”

Bernier, whose climate denial was the counterpoint that touched off the whole debate, called the Elections Canada trainers’ interpretation “absurd”, asserted that “the law should only regulate real partisan advertising, which is when there is mention of a candidate or party by name”. He added that “there are hundreds of potentially contentious issues that could be considered partisan if this rule were to be applied consistently.”

Prime Minister Justin Trudeau said he trusted Elections Canada to make independent decisions about the Canada Elections Act. “But I think the whole question highlights the fact that it is so frustrating that there are still conservative politicians in this country who don’t think climate change is real, and certainly don’t think we should be doing anything to fight it.” A spokesperson for Conservative Party Leader Andrew Scheer responded that the Liberal government should let Elections Canada do its job. “It is up to them to regulate groups that spend money on advocacy during the election writ,” Daniel Schow told the Globe and Mail.