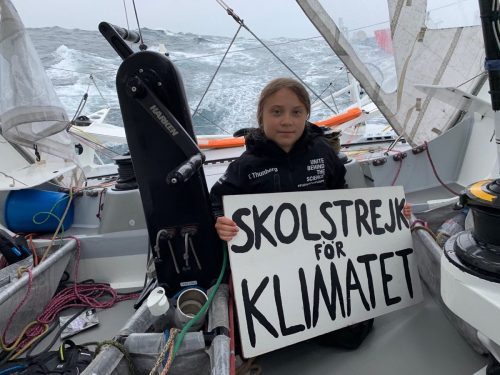 With #FridaysForFuture founder Greta Thunberg nearly a week into her carbon-free voyage to North America for a major climate change summit next month, climate deniers are stepping up their attacks, often focusing on her age, her style, and her autism in an all-out effort to shut down the momentum she has helped to build.

“The success of Thunberg—who describes herself on Twitter as a ‘16 year old climate activist with Asperger’—remains a sore point for those who reject mainstream climate science [memo to E&E: you can save space by just calling them ‘climate deniers’—Ed.] and some who have helped shape or encourage the Trump administration’s rollback of climate policy,” E&E News reports. “They frequently point to Thunberg’s autism, claim she is used by her parents, and compare her call to young people on climate change to ‘Hitler Youth’. They have pointed to her ‘monotone voice’ and framed her as a ‘millenarian weirdo’ with the ‘look of apocalyptic dread in her eyes’.”

One recent New York Times opinion piece “prompted an outcry among climate hawks and Thunberg’s allies, who said the newspaper was validating these types of personal attacks on the teenage activist,” E&E adds.

The attacks, some of them by organizations supported by the Koch brothers’ lavishly-funded climate denial network, have a follow-on impact on people with disabilities who are too often pushed out of public debate.

“Experts say relying on ad hominem attacks has significant collateral damage, in that they dissuade people with intellectual and developmental disabilities from speaking publicly,” E&E notes, citing autism and neurodiversity author Steve Silberman. “While the language of describing someone as a ‘puppet’ or abused by adults may appear coded, it’s clearly a dog whistle that signals her words should be discounted because her mind works differently.”

“It’s classic autism bashing,” Silberman said. “They feel at liberty to do it because autism has been framed as a pathology for decades, so they feel like they don’t have to hold back.” Thunberg’s fossil-funded critics “just ‘other’ her, turn her into a freak when she’s actually making more sense than 95% of the adults who have addressed this issue for the last 30 years.”

E&E cites overblown accusations against Thunberg from CO2 Coalition board chair Patrick Moore, Trump transition team member Steve Milloy, climate denial provocateur Marc Morano, Sky News host Andrew Bolt, and a couple of columnists for conservative publications. [The Energy Mix is deliberately not giving oxygen to the accusations by republishing them. You can click through to the original source material for full detail.]

Zoe Gross, spokesperson for the Autistic Self Advocacy Network, said attempts to belittle Thunberg by criticizing the way she speaks, answers questions, or shows emotion rely on “prejudiced ideas about autistic people,” and the labelling people with autistic traits face all the time.

“Some people may be making assumptions out of ignorance,” but “others are explicitly saying that autistic people are not worth listening to,” Gross wrote in an email to E&E. “It’s upsetting to see any person being belittled because of their disability, especially a child. People with all kinds of disabilities can form and express opinions, speak up for ourselves and others, and become advocates and leaders.”

Citing Silberman, E&E echoes a point Thunberg has frequently made herself—that her Asperger’s “informs her activism and motivates her to speak out against the falsehoods spouted by climate deniers,” helping her cut through the “false notion of a ‘debate’ in climate science.”

That enables her to speak like “one of the few people who has woken up out of this fever dream of bullshit that’s spread by these right-wing politicians and oil company misinformation,” Silberman added. “Unlike most neurotypical people, she can’t just shrug off the fact that of course oil company executives are going to lie and politicians who are beholden to them are going to lie. She can’t abide that, it bothers her almost viscerally.”

Thunberg has said that autism is “not a ‘gift'” but that it “CAN be a superpower.”

“I’ve had my fair share of depressions, alienation, anxiety, and disorders,” she wrote in an April Facebook post. “But without my diagnosis, I would never have started school striking. Because then I would have been like everyone else.”