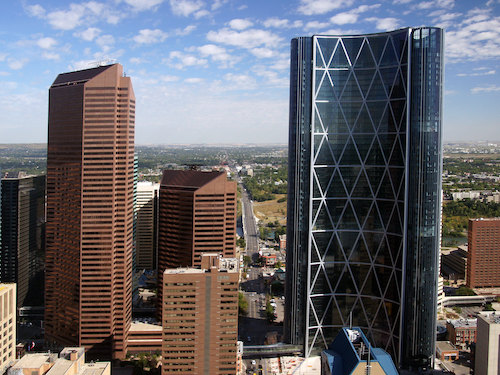 Alberta Energy Minister Sonya Savage is declaring herself “disappointed” that her province lost 14,300 jobs last month, bringing the unemployment rate up to 7%, in spite of healthy second-quarter fossil profits driven up by a 1% corporate tax cut introduced by Savage’s boss, Premier Jason Kenney.

On the campaign trail last spring, Kenney’s United Conservative Party promised to cut the tax rate by one-third, to 8%, claiming the move would create at least 55,000 jobs and expand the provincial economy by C$12.7 billion, the Calgary Herald reports. The 1% cut that took effect July 1 has delivered what Savage freely describes as a “windfall” for the companies, but not so much for Albertans hoping for a break in a tough, fossil-dependent economy.

While “several large oil and gas producers noted the impact on their bottom line,” writes Herald columnist Chris Varcoe, “only a few firms have increased spending plans that would create more employment.” The quarterly report showed Suncor Energy attributing $1.1 billion in profit, out of a total of $2.7 billion, to the tax cut, while Imperial Oil received $662 million in provincial largesse, out of $1.2 billion in quarterly profit.

“Despite improved profits, an array of issues has companies holding on to their chequebooks, including Canada’s ongoing pipeline constraints, difficulty in raising money, and the growing global trade concerns,” Varcoe states.

“Some of them are using it to buy back shares and to reposition (and) balance their books,” Savage said of the companies, in an interview with Varcoe. “It’s the same as when you come across a windfall as a private citizen, you pay down the mortgage.”

Ultimately, “we would like to see that money being invested into jobs. We’d like to see it being invested into projects; we’d like it to stay here in Alberta to create jobs,” she added. “So yeah, we are a little disappointed in seeing what decisions have been made on where that investment, where that money, goes. But that’s decisions of corporate boards.”

“Huh. It’s almost like the oil and gas industry is part of a global market and its success or failure isn’t the product of Alberta government policy,” tweeted Edmonton magazine editor Max Fawcett in response to Varcoe’s story.

Opposition New Democrats called the tax cut a historic “giveaway” to profitable businesses. “The concern is that there are companies that are not using the corporate tax savings—or the reduction in what they’re paying in taxes—to hire new people and invest in job creation, which is what Premier Kenney promised,” said MLA Deron Bilous. “Albertans need jobs today…not in two years from now.”

The Herald cites data from the Canadian Association of Petroleum Producers projecting a decline in the industry’s capital spending this year, with Peter Tertzakian, executive director of ARC Energy Research Institute, telling Varcoe the companies are directing the tax cut to the benefit of shareholders.