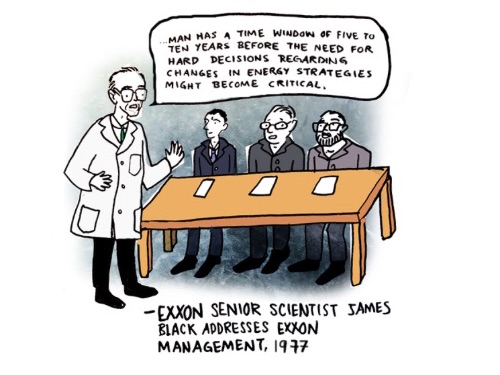 State prosecutors had accused Exxon of “trying to discourage potential witnesses from testifying about whether the oil giant misled investors over the costs it may face from future climate regulations,” InsideClimate News reports. “They asked a judge to block Exxon from making what they describe as ‘unreasonable’ and extensive requests for documents from the witnesses.”

Last Thursday, state supreme court justice Barry Ostrager agreed, concluding that the company “can’t go on a gigantic, burdensome fishing expedition to exhume hundreds or thousands of documents that have no relevance to the issues in this case.”

That was a reference to the notices Exxon sent to a group of investment advisers and shareholder activists who prosecutors were lining up to testify, “informing them they will be subject to subpoenas from the company seeking documents relevant to the case” if they agreed, InsideClimate states. With opening arguments in the fraud case scheduled for October 23, a lawyer in James’ office said that request would “impose disproportionate burdens on these witnesses, in a transparent attempt to discourage them from testifying voluntarily, and threatening to upend the trial schedule.”

Exxon’s request to at least one potential witness called for “all documents concerning your oil and gas holdings”, and more. The company said it planned to send similar requests to seven witnesses.

Loyola Law School law professor Aaron Caplan, a specialist in legal ethics, said Exxon’s demand was “unusually aggressive and tested ethical bounds, though he said Exxon could argue that it is simply being thorough in its defence,” InsideClimate adds.

“It tiptoes right up to the line of impropriety,” he said. “And whether it crosses that line is up to interpretation.” Following Ostrager’s ruling, James’ office responded that “we appreciate the court’s very reasonable decision to deny Exxon’s over-burdensome fishing expedition, and look forward to making our case in court this fall.”

On another front, Exxon closed the financial books on what the Institute for Energy Economics and Financial Analysis describes as “another dismal quarter”, with its stock seemingly on track to fall out of the top ten of the Standard & Poor’s 500 index for the first time since at least 1980. The Q2 report showed Exxon borrowing US$4.2 billion just so it could pay a dividend to shareholders, and ending up with its cash flow nearly $1 billion in the red.

In a separate briefing note, IEEFA Director of Finance Tom Sanzillo and Financial Analyst Kathy Hipple list 11 takeaways from the annual report that they say Exxon “would like investors to forget”. More broadly, “ExxonMobil’s diminished market position caps a 39-year decline of oil and gas dominance of the markets,” Sanzillo and Hipple write. “In 1980, seven of the top 10 companies in the S&P 500 were oil and gas companies. As of August 2 this year, there are none. In 1980, energy stocks commanded 28% of the S&P index.  Today, they comprise only 5%. Last week, the energy sector once again claimed last place in the S&P 500 ratings by sector.”