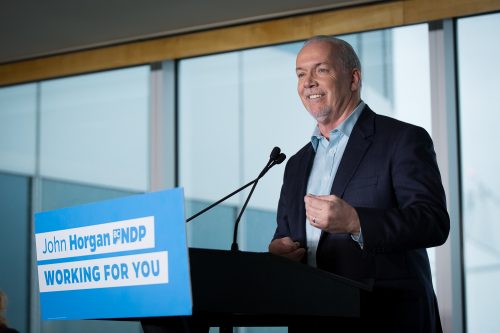 British Columbia is taking heat from two different news outlets for its avid support of natural gas fracking to feed its liquefied natural gas (LNG) boom, just as a new study reasserts the connection between fracking and a continuing increase in climate-busting methane emissions.

In a post for National Observer, Peter McCartney of the Vancouver-based Wilderness Committee describes fracking as B.C.’s “dirty natural gas secret”, suggesting few southern Canadians have any idea of the industrial activity in the province’s Peace region that drives the hype over LNG. “Flying over the countryside is the only way to fully grasp the scale,” he writes. “Fracking infrastructure blankets the region from the Alberta border to the Rocky Mountains. Gas plants, compressor stations, well pads, flare stacks, pipelines, wastewater ponds—it just goes on and on and on. I was horrified at just how much farmland and wilderness have been lost to fracking infrastructure.”

McCartney lists the immediate impacts on communities near Dawson Creek, B.C., pointing to massive water withdrawals in a region where the B.C. Oil and Gas Commission recently declared a drought. And the long-term risks of fracking “are even more worrisome. Little research has been done on the cumulative health impacts of fracking in the region, but doctors report bizarre incidences of rare cancers and scarring of the lungs with no clear cause. One community health researcher found evidence of benzene contamination in people. Benzene, a known carcinogen, was found to be 3.5 times higher in pregnant women who lived close to fracking sites and six times higher if those women were Indigenous.”

And now, with three new LNG projects in Kitimat and Squamish triggering demand for 13,000 new fracking wells over the next 30 years, McCartney says all those impacts are set to multiply. “While industry and government tout this new fossil fuel industry as the ‘cleanest LNG in the world’, there’s little talk of the explosion in fracking operations it would bring,” he writes. “We know the only path to limiting global warming to safe levels is zero-carbon renewable energy, not fracked gas.”

On The Tyee, reporter and editor Paul Willcocks focuses on the provincial subsidies that are making it all possible. The same government that commissioned a report on the climate impacts bearing down on the province “handed almost two-thirds of a billion dollars to fossil fuel companies—C$130 per person in the province—so they’ll extract more methane, more quickly,” he writes. “Which is perverse in a time when we’re warned of climate disaster.”

B.C. has reduced the royalties companies pay on the natural gas it allows fossils to extract and sell, enriching the companies while putting the onus on taxpayers to make up for the lost revenue. One reporter places the province’s largesse at $6.5 billion since 2007, and “even that understates the amount of the subsidies,” Willcocks writes. “Companies can’t claim the credits until the wells are producing, but they file their future claims with the government based on the work they have done. Those liabilities—money taxpayers now owed them for future royalty reductions—are closing in on $2.7 billion.”

Days after Observer and The Tyee published their stories this week, a Cornell University study in the journal Biogeosciences pointed to the “chemical fingerprints” of the increase in atmospheric methane as evidence that likely links it to oil and gas fracking.

“Methane, levels of which have been increasing sharply since 2008, is a potent greenhouse gas that heats the atmosphere quicker than carbon dioxide,” and “researchers at Cornell said the carbon composition of atmospheric methane, or the ‘weight’ of carbon within each methane molecule, was changing, too,” The Guardian explains. With the proportion of methane with a carbon signature linked to traditional fossil fuels on the decline, scientists “had previously assumed the ‘non-traditional’ methane was from biological sources such as cows and wetlands, but the latest research suggests unconventional oil and gas from fracking may be playing a significant part.”

That finding “would support a correlation in the rise of methane in the atmosphere and the boom in fracking across the U.S. over the last decade,” the UK-based paper adds.

“This recent increase in methane is massive,” said lead author Robert Howarth. “It’s globally significant. It’s contributed to some of the increase in global warming we’ve seen, and shale gas is a major player.” And by the same token, the methane would dissipate if humans stopped emitting it. “It goes away pretty quickly, compared to carbon dioxide,” he said. “It’s the low-hanging fruit to slow global warming.”

Prof. Grant Allen of the University of Manchester Centre for Atmospheric Science called Howarth’s conclusion “highly contentious in the academic community,” adding that “further work is needed to constrain uncertainty before conclusions such as this can be robustly backed up.” But the paper “makes a very important point,” he said. “Controlling emissions from fracking, and fossil fuels in general, represents a potential policy quick fix to stemming the rise of methane still further.”

WE ALL MUST BECOME WATER PROTECTORS !!! BAN FRACKING IN CANADA NOW !!!

I think it would be really good if people who understand the problems with fracking and LNG also understood the direct subsidization of the industry with our river valleys as in the case of building a third dam on the Peace River at site c. Aside from the financial costs of building the project (multiple hydro electric projects) in the case of more than one LNG facility, there is the loss of integrity and honesty in infringing on treaty rights, loss of valuable valley bottom land, wildlife habitat, etc. which are not calculated into Hydros costs of production, but which we nevertheless pay for.