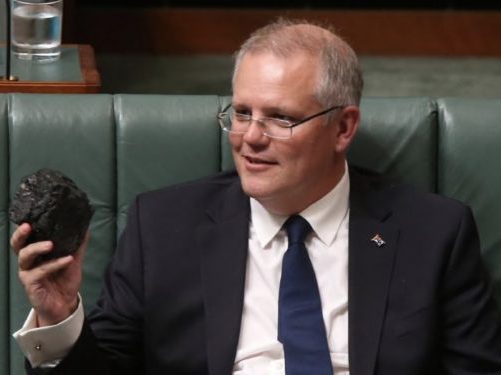 Australia is trying to water down references to the climate “crisis”, the long-term goal of 1.5°C average global warming, a ban on new coal-fired generation, and an end to fossil subsidies in the final declaration from this week’s annual Pacific Islands Forum leaders’ meeting in Tuvalu, according to an annotated draft seen and reported by Climate Home News.

The move means Australia’s climate-denying Liberal coalition “appears to be walking away from long-term Paris climate targets,” writes New South Wales-based RenewEconomy. “The Pacific Island Forum is shaping up as a significant test for Australia, as it seeks to boost its influence over the Pacific nations in the face of growing Chinese influence, and as it seeks to try to convince a highly doubtful Pacific that it takes climate change seriously.”

Earlier in the week, Prime Minister Scott Morrison arrived at the meeting with chequebook in hand, announcing A$500 million in climate and oceans funding for the region,. But by then, it was already clear his offer would not mute Pacific islanders’ calls for his climate-denying, coal-friendly government to begin showing real leadership in response to the climate crisis.

Morrison’s financial offer was on top of the five-year, $300-million contribution his government had already put forward for renewable energy investment and climate and disaster resilience. “The government also announced it had set aside $140 million from the aid budget to encourage private sector investments in low-emission, climate-resilient projects for the Pacific and Southeast Asia,” The Guardian reports.

“The Pacific is our home, which we share as a family of nations,” Morrison said. “We’re here to work with our Pacific partners to confront the potential challenges they face in the years ahead.”

But if this is the way Morrison treats his home, you probably don’t want to see the state of his kitchen.

“In comments on the draft dated August 7, Australia sought to wriggle out of its climate commitments and weaken language on limiting global temperatures to 1.5°C of warming—the tougher target of the Paris Agreement that small island states say is essential to their survival,” Climate Home writes. “Among suggested edits, Australia deleted references to the 1.5°C goal being an ‘irrefutable red-line’ for forum members, instead referring to limiting temperature rise ‘in line with the Paris Agreement’. It also pushed back against efforts to bring national policies in line with the latest science on 1.5°C from the International Panel on Climate Change’s (IPCC) report on 1.5°C.”

Instead, “Australia agreed to ‘recogniz[e] the information’ in the report without endorsing its conclusion that global emissions must fall 45% by 2030 and reach carbon neutrality by 2050 for a reasonable chance of limiting warming to 1.5°C,” Climate Home adds. “Indeed, Australia’s version excises any mention of achieving net zero emissions by 2050.”

“All the measures rejected in the draft communiqué are key components of the long-term purpose of the Paris climate treaty, which aims to cap average global warming to well below 2.0°C, with an aspirational target of 1.5°C,” RenewEconomy notes. And while Morrison’s financial offer carried the headlines earlier this week, “Australia set the tone for the event by sending junior minister Alex Hawke—who has the portfolio for international development and the Pacific, but who is one of the many climate skeptics in the Coalition’s ranks—to do the preparatory work ahead of the forum.”

Hawke has a history of favourably quoting climate deniers, writes RenewEconomy founder and editor Giles Parkinson, once describing elected climate hawks as “amateur scientists, wannabe weather readers… people who like to come in here and make the most grandiose predictions about all sorts of scientific matters without even a basic understanding of the periodic table.”

Australia’s diplomatic machinations aside, Morrison is virtually certain to “face strong pressure from other Pacific leaders when he arrives in Tuvalu on Wednesday, many of whom have already issued warnings that they want commitments from Australia at this forum for concrete action to reduce emissions and to move away from coal-fired power,” The Guardian wrote earlier in the week. In a direct appeal Monday, Fiji Prime Minister Frank Bainimarama called for Australia to shift away from coal and “to more fully appreciate” the “existential threat” facing Pacific nations.

“I appeal to Australia to do everything possible to achieve a rapid transition from coal to energy sources that do not contribute to climate change,” said Bainimarama, who chaired global climate negotiations during COP 23 in Bonn in 2017.

“That transition should be just for your own people and just for us here in the Pacific, where we face an existential threat that you don’t face and challenges we expect your governments and people to more fully appreciate,” he added. “Put simply, the case for coal as an energy source cannot continue to be made if every nation is to meet the net zero emission target by 2050 that has been set by the UN secretary general and every other responsible leader of the climate struggle.”

Prime Minister Enele Sopoaga said Tuvalu’s positive relationship with Australia could change if his country’s long-standing concerns about the climate crisis are not taken seriously.

“I hope we can be more understanding that the people of Tuvalu and small island countries are already submerged, are already going underwater,” he said. “If our friend Australia does not show them any regard, any respect, it is a different thing, we cannot be partner with that thinking. I certainly hope we do not come to that juncture…while you keep pouring your coal emissions into the atmosphere that is killing my people and drowning my people into the water.”

“Our situation in Kiribati and in the Pacific, it’s not about cash, it’s not about giving lots of money, if Australia doesn’t do actions within their own country,” said Claire Anterea, co-founder of the Kiribati Climate Action Network. “Money is not the solution for the impacts of climate change. Our Kiribati government is working toward adaptation, but my worry is how long are we going to adapt? Adapt forever? I don’t think that is a possible solution for us, there will be a time when adaptation is not going to work.”

Simon Bradshaw, climate advocacy lead at Oxfam Australia, said Morrison’s funding announcement wouldn’t leave the country off the hook for its copious greenhouse gas emissions. “It’s one part of the equation, it’s an important part, but really it carries no meaning if it’s not accompanied by new strong commitments from Australia to drive down its emissions, its carbon pollution, to move beyond coal, to play its part in limiting warming to one and a half degrees, which we’ve heard repeatedly is crucial to survival in the region,” he said.

Pacific island nations are “absolutely clear that Australia’s rising emissions, our coal exports are threatening their very survival,” Bradshaw added. “From all the talk we’ve heard this week, whereas this [financial] commitment will be welcomed, it’s certainly not going to quieten the concerns of Pacific leaders who have been very clear that they want Australia to look beyond coal, to move to 100% renewable energy, and to really appreciate the sorts of challenges they face here.”