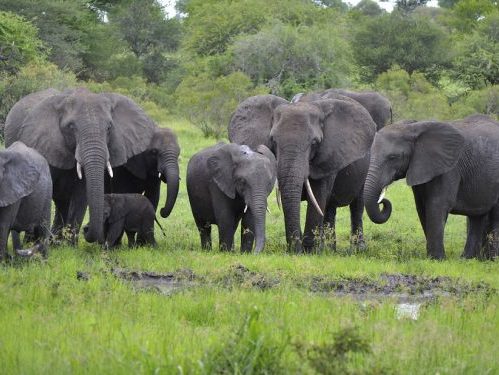 Failing to protect Africa’s remaining elephants from extinction could further accelerate the climate crisis, as the massive herbivores play a significant role in allowing long-lived hardwood trees of the rainforest to grow huge and dense enough to store vast quantities of carbon.

A computer modelling study recently published in the journal Nature Geoscience found that grazing elephants significantly transform the ecosystems through which they move, with consequent impacts on atmospheric carbon. Thinning out the understory of shrubs and smaller trees reduces competition for sunlight, water, soil nutrients, and space, “which over time leads to fewer but larger hardwood trees, which live longer and lock away more carbon than softwood ones,” writes the Independent.

A rainforest without elephants, however, is more conducive smaller, lower-density trees whose tissues are less able to store carbon. The international team of biologists and agricultural informatics specialists found that the “extinction of forest elephants could lead to a 7% drop in ‘aboveground biomass’—the weight of trees including branches and foliage—in western and central African rainforests.”

Protecting the continent’s remaining elephants would have quite the opposite effect, however, with researchers calculating that the animals effectively “represent a carbon storage service of US$34 billion at a conservative stock price.” With that number in hand, the authors urged policy-makers to reassess “the value of the ecosystem services provided by the forest elephant and other megaherbivores” in relation to carbon storage policy, forest management, and conservation.