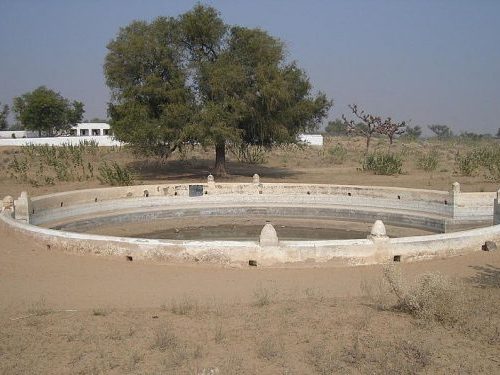 It was while reporting on environmental crises across India that Subramanian came across the small-scale earthen dams known as johads, she writes for the New York Times.

Thousands of these johads have been constructed by villagers across the northern state of Rajasthan, “strategically placed to capture fleeting monsoon rains” into cascades sufficient to replenish aquifers “that had been dry for a generation.”

In the Kumbharwadi watershed of the western state of Maharashtra, Subramanian observed how “groundwater levels rose, soil fertility improved, and agricultural income increased tenfold”, thanks to a program that had locals planting trees and sculpting land to better capture what water still falls from the sky.

In the face of the “terrifying water crisis” that has been afflicting the eight million citizens of the northeastern coastal city of Chennai since last year, Subramanian says that “to survive the climate emergency, India needs the collective power of small-scale, nature-based efforts.”

What the country does not need, she maintains, are more megaprojects. While “the story of water is global,” she writes, “the impact of too little (or too much) water is intimately local,” and “solutions need to be local, too.”

But India’s leaders have yet to heed such warnings, as “governments in Chennai and elsewhere keep turning unilaterally to major infrastructure projects such as desalination plants and other large-scale projects involving linking distant rivers and constructing mega-dams,” Subramanian writes. She flags desalination plants (Chennai is building its third) as particularly egregious given the huge amounts of energy required to transform seawater into fresh. “India is already struggling to get power to its people, even as the plants discharge toxic brine that is worsening already degraded coastlines,” she writes.

Recalling Prime Minister Narendra Modi’s promise to deliver piped water to all by 2024, Subramanian observes that the Indian government could indeed “meet that goal by looking beyond the grey confines of concrete to the green of powerful natural water systems that worked in the past and could work again.” But “Modi’s government’s focus on huge projects is flawed, because moving water works only if there is water to move.”

Subramanian acknowledges that South Asia “has always been vulnerable to the vagaries of the monsoons that provide 70% of its water in a few months, feeding its rivers, recharging its groundwater, and topping off the Himalayan peaks whose glacial meltwater sustains 1.65 billion people.”

But while that vulnerability has grown astronomically with the advent of climate change, she says one-size-fits-all megaprojects will not save India. What does stand a chance is “the collective power of abundant, small-scale, nature-based efforts to seize the seasonal bounty across the diverse landscape of South Asia.” That might mean johads in one village, land-sculpting in another.

She adds that cities like Chennai, whose suffering is redoubled by rampant development that has destroyed the spaces that were natural sponges for monsoon rains, should adopt rainwater harvesting from rooftops, thereby “compensating for the urban layer of concrete that now seals underground aquifers from monsoon abundance and contributes to flooding.” (The city made an attempt in that direction in 2003, she says, but the initiative died when a new party assumed power in the city.)

Noting that 90% of India’s “precious freshwater” goes to agriculture, she also urges that the country “support established conservation practices and reconsider exporting such water-intensive crops as rice and cotton.”

Finally, water metering “could help isolate and fix the leaks that waste a staggering one-third of all Indian water.”

Widening her lens, Subramanian notes that “water crises are now global and perennial”, with nearly half of the human population “living with water scarcity, inhabiting places unable to fully meet their drinking, cooking and sanitation needs.” The poor, without resources to buy water tankers or dig wells, are disproportionately affected. And as for water megaprojects, “when grand projects fail, they fail grandly.”

Guterres Asks Countries to Plan for Carbon Neutrality by 2050