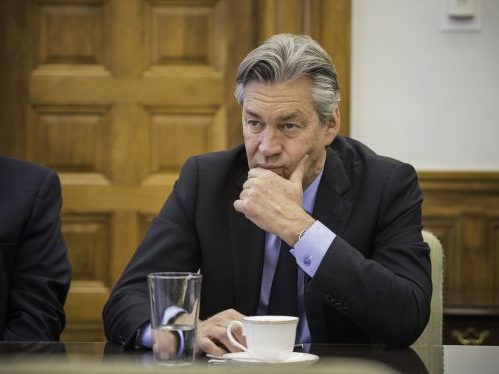 The need for major resource projects to receive “social licence” before they proceed sustained attacks from two different sides of the political spectrum at the recent Williston Basin Petroleum Conference in Regina, with Manitoba’s former NDP premier Gary Doer and Saskatchewan’s ex-Saskatchewan Party premier Brad Wall agreeing the concept has no place in the project approval process.

“I find it’s a phoney term,” said Doer, who also served as Canada’s U.S. ambassador from October 2009 to March 2016. “Do you know what my problem with social licence is? It’s all social and no licence.”

“We should never use that term ‘social licence’ again,” Wall added.

The conference took place in late May, but industry newsletter JWN Energy reported the two retired politicians’ remarks this week.

Wall’s objections to the concept began with the “whole bunch of things” he said it implied. “First of all, that you don’t have it already, as a sector. You need to apply for it from someone. We really don’t know who is the issuer of the social licence,” he said.

“We especially don’t know who the issuer is after the first Western Canadian foray to earnestly earn social licence, the Alberta carbon tax, resulted in precisely zero change in the environmental political support for a pipeline project.”

He added that it’s “not just a speaking point” to say the Canadian fossil industry has “paid” its social licence “in the taxes this industry has provided, to all of Canada. It’s paid in the direct support to transfer payments, that have quite literally ensured the survival and the viability of social programs. It’s paid for in the jobs that are created for Canadians.” Which “doesn’t mean, as a sector, that we ought not to be trying to better by the environment.” But “really, my view is we should separate these two things.”

Wall said Canadian fossils and the governments aligned with them—including his own—have been “very flatfooted” in pitching their industry. [Who knew??—Ed.] “We have been not at all effective in telling the story that already exists about the sector, which would have earned whatever social licence implies, and maybe avoided some of the challenges they’ve faced recently to get the right public policy and pipelines built in Canada.”

Doer said social licence “has almost become a strategy to get a veto, as opposed to get approval.” He told conference participants he’s all in favour of “consultation with people affected, absolutely. It’s part of the due diligence process. In my way of thinking, it’s better to be done before you even propose something. You bring in engineers, lawyers, accountants proposing something. Know the lay of the land ahead of time, through consultations.”